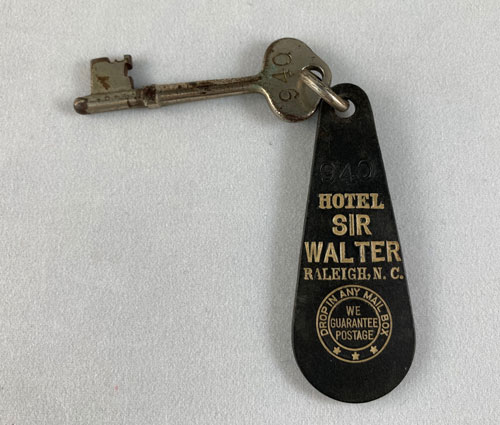 “In the 1950s, back in the days when legislators stayed in downtown Raleigh’s Hotel Sir Walter during legislative sessions, you couldn’t buy a drink anywhere in town.

“And didn’t need to. Each of the 45 liquor salesmen who supplied N.C. ABC stores had three cases of liquor a month to give away – and much of it was delivered to the loading dock of the Hotel Sir Walter and quickly stored (wink, wink) in a room ostensibly rented to A.B. Carter. Notice anything cute about Mr. Carter’s initials?

“A memorable front page from the News & Observer on May 28, 1957 featured seven photographs of liquor arriving, being unloaded, carried into the hotel and delivered to certain rooms by a bellhop around noon. The local Alcoholic Beverage Control board office was notified at 3 p.m. and sprang into action. And sprang. And sprang. After, oh, about an hour and a half, ABC agents finally entered the room where the contraband booze had been taken – and it was empty. What a surprise. The newspaper’s photos proved what had happened, and once again the state’s ABC law enforcement officers looked like Keystone Kops – without as much action….”

“A.B. Carter” was actually Frank Sims, former lobbyist for the Association of County ABC Boards, who was later fined $100 for registering at a hotel under an assumed name.

Forgive me if I like to imagine one of those deliveries being made to this key’s Room 940.

— Jack Betts, the Great State’s foreign correspondent in Raleigh for the past two decades,  debarks more suddenly than but just as gracefully as his positively-addicted readers would expect. Jack will dispute this — of course! — but it was his unrelenting editorials and columns that took the lead in sparing Eastern North Carolina the Navy’s ill-sited landing field.  In his un-bow-tied hours, he has been an unrivaled fool for tools, managing to wring romance out of an aluminum pot that “perked coffee in five states, on four boats and in at least three houses,” a C-ration can opener brought home from the Army and on his last day a humble tin cheese grater. Happy retirement, Jack.

— Yet another remarkable entry in the New York Times’ Disunion blog, this one about North Carolina’s wrenching decision to secede. Overall, it’s been exciting to see historians and journalists in 2011 probing the way to war so much more ambitiously than in 1961.

— “It certainly would be nice to have another Ohio native become part of our basketball program here at Chapel Hill.”

— Number of Raleigh women listed in 1860 census as prostitutes: 46