Our friends and coworkers on the 4th floor of Wilson Library have just posted “A Nursery of Patriotism: the University at War, 1861-1945.” This online exhibit examines how the Civil War, World War I, and World War II impacted students and faculty at the University of North Carolina.

UNC and Duke partisans shouldn’t be too hard on the two skydivers from Virginia-based Aerial Adventures who recently mistook Duke’s Wallace Wade Stadium for Kenan Stadium in Chapel Hill, eight miles away. After all, they are not the first to have confused the two institutions.

Hired to deliver the game ball for UNC’s August 30th season-opening football contest with McNeese State, the parachutists declined to jump because of bad weather when they passed over Kenan. A few minutes later the clouds broke. The men saw a stadium below, assumed they were again over Kenan, and jumped—to the confusion and then delight of Duke fans gathered for pre-game ceremonies.

Confusing UNC and Duke is simply inconceivable to alumni and fans of the two fierce rivals. But it does occasionally happen and not just among parachutists. Shortly after Caldwell Hall was dedicated on the UNC campus in 1912, the S. H. Kress & Co., published this postcard, which identified the building as being on the University of North Carolina campus—in Durham. 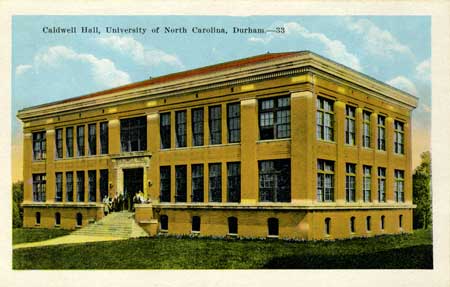