I don’t mean to dwell on postcards, but you really do find some amazing things on both sides of them. Most of our blog entries have focused on the image side, but some have examined the messages found on the cards. As I was editing a recent batch, I noticed the following message on a postcard from Oak Ridge Military Institute: 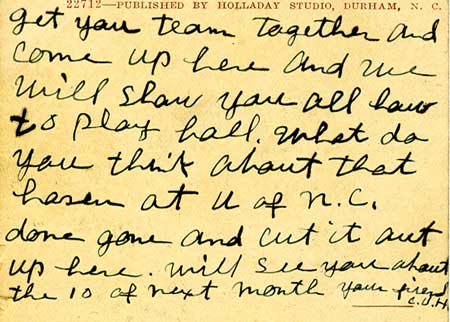 “get your team together and come up here and we will show you all how to play ball. What do you think about that hasen at U of N.C., done gone and cut it out up here. Will see you about the 10 of next month your friend C.U.H.”

The postcard is postmarked 18 September 1912. Something about “hasen” [hazing] and September of 1912 sounded very familiar…and then it hit me: the Isaac William Rand hazing incident.

For those of you that have not heard of this, a short version of the story from our “This Day in the History of the University of North Carolina at Chapel Hill” website is below:

“September 13, 1912:
Isaac William Rand, a freshman from Smithfield, died in an early morning hazing incident. After falling from a barrel and cutting his jugular vein on a broken bottle, he quickly bled to death. Four sophomores were dismissed from the University for the episode, and they were later arrested by Orange County officials. After the trial, one was acquitted of any wrongdoing and three were found guilty of manslaughter.”

For more information on this incident, visitors to the North Carolina Collection can view Materials pertaining to the hazing death of Isaac William Rand, 1912 / compiled by Jerry W. Cotten.