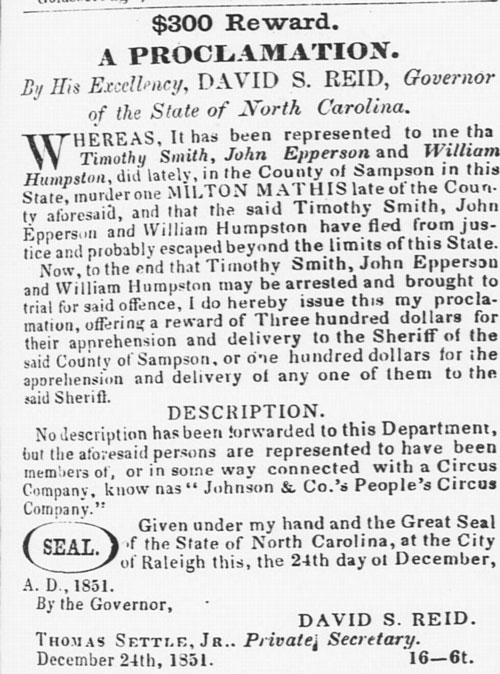 It’s unclear whether Governor David S. Reid’s offer of a $300 reward resulted in the arrest of the three members of Johnson & Co’s People’s Circus charged with killing Milton Mathis. But perhaps the answer lies in a subsequent edition of William Woods Holden’s Semi-Weekly North-Carolina Standard. Consider this your invitation to search.

I’m happy to report that your search may have just gotten easier. The Standard and a host of other North Carolina newspaper titles are now available online and searchable via Chronicling America, a joint project by the Library of Congress and the National Endowment for the Humanities to make available online historic U.S. newspapers published from 1836 through 1922. The North Carolina Collection and its partner, the N.C. Office of Archives and History, received funding in 2012 to scan microfilm of titles from the Old North State and prepare them for publication on Chronicling America. It’s a slow process. But in the coming months you should gain online access to 100,000 pages from 21 North Carolina newspapers.

In the coming months you’ll find issues of The Independent of Elizabeth City; the New Bern Weekly Progress; the Rockingham Post-Dispatch; the Fisherman & Farmer of Edenton and Elizabeth City; The Review of High Point; The French Broad Hustler from Hendersonville; The Durham Daily Globe; The Semi-Weekly Messenger from Wilmington; The Sun from Fayetteville; the Journal of Freedom from Raleigh; The Gold Leaf from Henderson; The Weekly Caucasian from Clinton, Goldsboro and Raleigh; the Wilmington Journal; and the Cherokee Scout of Murphy.

The titles were chosen by an advisory board that included historians, librarians and even a representative from the N.C. Press Association. I know that you probably have your favorite newspaper that you’d like to see online. We have ours, too. And we hope to add more in the coming years. Stay tuned.

In the meantime, get reading and searching. You’ve got to solve the Mathis murder.