Last year, NC Miscellany noted that despite its status as the largest African American managed financial institution in the United States, there was no Wikipedia article about the North Carolina Mutual Life Insurance Company.

An article about the company has since been created, but it needs more work. And it’s just one of many weak areas in Wikipedia’s coverage of topics related to African American history in North Carolina.

On Sunday, March 30, the North Carolina Collection will host its second Wikipedia edit-a-thon, from 1:00 to 4:30.

Participants will create, expand, and improve Wikipedia articles about African American history, culture, people, events, and institutions in North Carolina. All are welcome — no special topical knowledge or Wikipedia experience is needed. Bring a laptop and we’ll help you do the rest!

For more details and to RSVP, see the event page.

In honor of Women’s History Month, the North Carolina Collection looks back at 1944 — which was an interesting year to be a woman at UNC.

Women’s enrollment numbers climbed while men left the classroom in unprecedented numbers to serve in the military. Women’s athletics flourished, with “coeds” playing soccer, volleyball, tennis, basketball, and badminton. And for the first time, UNC held what the 1944 yearbook, the Yackety Yack, calls a “unique ‘beauty’ dance,” in which thirty-two Carolina women vied for eight beauty queen titles.

They were complicated times to be sure. To offer a more personal window into coed life that year, we offer our March Artifacts of the Month: two charms that belonged to Jean Holmes Lochridge, Class of 1944. 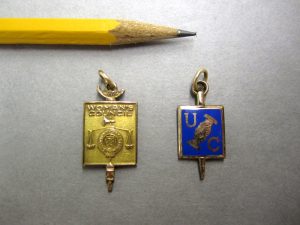 The charms represent the Women’s Council and the University Club. According to the description accompanying her senior photo in the Yackety Yack, Lochridge was a member of both, in addition to the Alderman House Council, the Phi Assembly, the Executive Committee, the Senate, and the Intramural Volleyball and Badminton teams.

Lochridge’s daughter donated these charms to the NCC Gallery, and we’re honored to be charged with their stewardship. Not only are they a valuable reminder of the general student experience at UNC in 1944, but they also offer a unique slice of life from the perspective of one intriguing Carolina woman.