Just as the nation was embarking on the the current wars in Afghanistan and Iraq, North Carolinians were reminded of the conflicts, hot and cold, of an earlier era. Charles Robert Jenkins, a soldier from Rich Square, North Carolina, disappeared while patrolling the DMZ in Korea in 1965. Nothing was heard of him again until 2002 when his Japanese wife and four other Japanese kidnapped by the North Koreans were allowed to visit their homeland. Jenkins did not accompany his wife, in part because the North Koreans were using him and their two daughters as hostages to force Mrs. Jenkins to return, but also because Jenkins feared extradition to the United States to face a court-martial.

The case of the Jenkins family became a cause célèbre in Japan, where there was much sympathy for Mrs. Jenkins. North Carolinians were not of one mind on Mr. Jenkins. Was he a deserter, or someone victimized by the North Koreans–or both? Two years of media attention and diplomatic activity produced a resolution. Mr. Jenkins went to an American base in Japan and admitted to a court-martial that he deserted because he feared being sent to Vietnam. The court showed mercy, giving Jenkins a short sentence. He and his family retired to his wife’s hometown in Japan where Jenkins wrote his autobiography, which was published in Japan in 2005. The North Carolina Collection now has a copy of that work, Kokuhaku=To Tell the Truth. If you can’t read Japanese, check back in 2008, when the University of California Press will be publishing an English language edition of the autobiography under the title The Reluctant Communist: My Desertion, Court-Martial, and Forty-Year Imprisonment in North Korea. 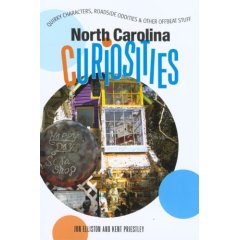 I’m proud to announce that the North Carolina Collection Gallery has been officially designated a Curiosity. The Gallery is featured in the new book North Carolina Curiosities, containing “quirky characters, roadside oddities and other offbeat stuff” from around the state. The entry on the Gallery mentions the permanent exhibit on Chang & Eng Bunker and, what must be the Gallery’s most unexpected holding, the Napoleon death mask.

North Carolina Curiosities is a fun book, covering many Tar Heel sites of historic and general interest. I was happy to see Dr. Brinkley‘s home in there, as well as some familiar sites like the mother vine in Manteo, the Thomas Wolfe angel in Hendersonville, and, a personal favorite, Weiner Dog Day in Carrboro.