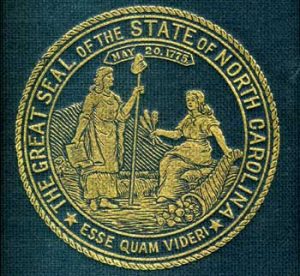 William Saunders, who served as North Carolina’s secretary of state from 1879 to 1891, edited the first ten volumes of the series, which where titled the Colonial Records of North Carolina. As secretary, he had unique access to public records, many of which were then in the custody of the secretary’s office. Although authorized by the resolution to cover the period up to 1781, time constraints and ill health required him to conclude with the ratification of the North Carolina State Constitution in December 1776. In keeping with the general tradition of historical editing, Saunders arranged the materials in chronological order, but the volumes contained no indices and no tables of contents, either individually or as a set.

After Saunders’ death in 1891, a second editor, Walter Clark, began where the first left off. As a justice on North Carolina’s Supreme Court, Clark did not have Saunders’ privileged position with respect to the state’s records, but his concern to preserve and promote the state’s history caused him to go to great lengths in search of relevant materials. He hoped to fulfill Saunders’ original intent of continuing the series through 1781, but after he had been collecting documents for two years, the General Assembly authorized him to publish the records of the subsequent decade as well. The sixteen volumes that Clark published between 1895 and 1907 are known as the State Records of North Carolina. Though the title is different, Clark decided to continue the series’ sequential numbering and attempted to continue the chronological arrangement of the earlier volumes.

In 1895, Stephen B. Weeks, who is considered by many scholars to be “North Carolina’s first professional historian,” was selected to prepare an index to both the Colonial Records and the State Records. The task was daunting, and it took him almost twenty years to complete the four-volume master index for the set, the index to a subset of published laws, and the index to the 1790 census in volume 26. In addition, Weeks wrote a lengthy essay describing previous efforts to document North Carolina’s history, providing an “analysis of the materials printed,” and surveying still unpublished historical materials relating to the state available in various public and private collections.

Though the series is over a century old, it continues to remain an important resource for individuals researching North Carolina’s history and peoples. In recognition of its value and in an attempt to make it even more accessible, UNC Library’s Documenting the American South has scanned and published online the entire thirty-volume set.