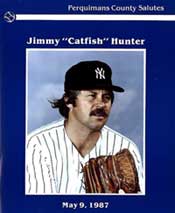 The website has this to say about Hunter’s nickname:

“Hunter was nicknamed ‘Catfish’ by Royals owner Charles Finley, who felt the youngster needed a catchy nickname. The owner then created a story that Hunter had caught a large catfish when he was a boy. Though the story was fictional, the nickname stuck.”

A native of Hertford, North Carolina, Catfish was inducted into the National Baseball Hall of Fame in 1987. He passed away in 1999.

Since Catfish was a product of the Tar Heel State, the North Carolina Collection has several items related to him. They are:

Catfish : my life in baseball / by Jim “Catfish” Hunter and Armen Keteyian.

Perquimans County salutes Jimmy “Catfish” Hunter : May 9, 1987. [Image above comes from this item.]

The picture story of Catfish Hunter / by George Sullivan.