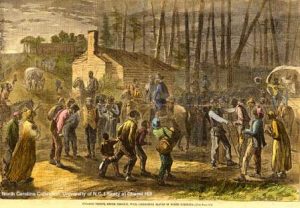 Over the past few months we’ve been “re-highlighting” digital resources that can be found on the NC Collection’s website. Today’s feature is our “Civil War Image Portfolio,” which can be found at: http://library.unc.edu/wilson/ncc/pcoll/civilwar/index.html.

Images in the North Carolina Collection depicting the Civil War are from woodcuts, engravings, lithographs, and photographs. The overwhelming majority of these were made by persons accompanying Union forces or were made from sketches and other information they provided. Numerous woodcuts appeared in publications based in the North such as Harper’s Weekly and Frank Leslie’s Illustrated Newspaper. Lithographers, including Nathaniel Currier and James Merritt Ives in New York City, produced hand-colored prints depicting Civil War events including some in North Carolina. The North Carolina Collection Photographic Archives has twenty-seven carte-de-visite prints attributed to Union photographer O. J. Smith made in New Bern about 1863, following the town’s occupation. Most of the images owned by the Collection, regardless of format, are from a northern perspective and provide limited insight into life within the Confederacy. Even so, the images are significant historical documents.

Captions or image descriptions are grouped in categories by subject. Within each category, they are subdivided by county, town, and chronology.