Gourmands of North Carolina rejoice! Two of the state’s iconic, sweet concoctions have joined forces. Starting today, Krispy Kreme plans to sell Cheerwine-flavored, cream-filled doughnuts. Apparently Krispy Kreme customers have long clamored for the pairing. The alliance between the Winston-Salem baker and Salisbury soft drink manufacturer will last through at least July and you can find these delectable (at least to some) treats at grocery stores in North and South Carolina.

The new flavor got us to thinking about other possible pairings between Krispy Kreme and North Carolina products. One North Carolina Collection staffer (he shall remain nameless to protect his reputation as purveyor of good taste) wondered about Texas Pete-flavored Krispy Kremes or adding Goody’s sprinkles to the classic glaze-covered doughnut. How about a Pepsi-flavored topping? Ideas anyone?

And while your tickling your taste buds with a Cheerwine Kreme Filled Doughnut (or two or three), how about some stimulation for your brain? All that sugar may have kicked it into high gear.

How long has that “Hot Now” sign been burning?

Does the recipe for Krispy Kreme’s success include more than sugar? 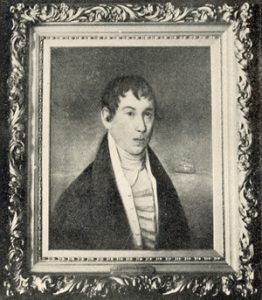 In July 1813 Otway Burns of New Bern, North Carolina, applied to the United States government for a Letter of Marque and Reprisal, thus launching the career of North Carolina’s most successful privateer.

Burns was a shipmaster in the coastal trade sailing between New York and New Bern with occasional trips as far north as Nova Scotia and as far south as the Caribbean. Returning from such a voyage in 1813 he learned that war had broken out between the United States and Great Britain. Burns formed a joint stock company with several businessmen in New Bern to arm and outfit a ship to prey on British commerce. Finding a suitably fast and maneuverable ship in New York, he purchased it and renamed it the Snap Dragon.

With the receipt of his Letter of Marque, Otway Burns became a privateer. Since the 13th century, European and, later, American countries had commissioned private citizens to attack their enemies in time of war. The United States Constitution specifically empowers Congress to issue such letters.

A Letter of Marque (also called a Letter of Marque and Reprisal) allowed a private ship owner to use his vessel to capture enemy shipping. The Letter set down the rules under which this could be done. A captured ship had to be taken to an American port where a United States District Court would decide whether it was in fact an enemy vessel and whether the Letter of Marque was valid. If the court decided in favor of the privateer, the ship and its cargo were condemned and sold at public auction with the proceeds being divided between the owner and crew of the privateering vessel.

Supporters of the privateer system argued that it allowed a country with a small navy dramatically to increase its naval power in wartime. Opponents of the system argued that it was little more than legitimized piracy, and in fact several well known pirates had obtained dubious Letters of Marque as a cover for their criminal activity.

American privateers as a whole did substantial damage to British shipping in the War of 1812, capturing, by one estimate, more than 1300 British ships. Burns and the Snap Dragon contributed their share to that total. There is no complete record of the career of the Snap Dragon, but one authority estimates that she engaged 67 British vessels, capturing 42 of them. Another authority states that on one voyage Burns captured ten ships, with 250 prisoners and cargo valued at more than a million dollars.

Although Burns’ primary target was the British merchant fleet, he was involved several times in scrapes with enemy war ships. Burns made three voyages but was prevented by rheumatism from sailing a fourth time in May 1814. On this trip, under Captain W. R. Graham, the career of the Snap Dragon ended when she was captured by the British sloop-of-war Martin.

After the war, Burns turned to mercantile interests and ship building. He began a political career in 1821 and served in a number of General Assemblies, until 1835. In that year he was one of the few votes from eastern North Carolina in favor of calling a constitutional convention to consider increasing the political representation from the western part of the state and the popular election of the governor. The vote ended his political life but earned him much gratitude in the west. Burnsville, the seat of Yancey County in the North Carolina mountains, was named for him.