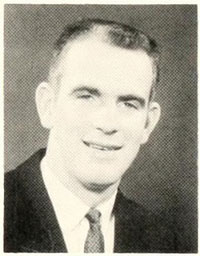 Can anyone identify this famous North Carolinian? Here are two clues: the photo shown here is from the 1959 Pine Burr, the Campbell College yearbook, and the subject of the photo went on to write a book called Me and the Spitter: An Autobiographical Confession.

Learn the answer to this question (and much more!) on Digital North Carolina, the new blog of the North Carolina Digital Heritage Center. Visit often to find fun and interesting highlights from the collections available online at DigitalNC.org.

The UNC Photo Lab collection in the Photographic Archives includes over 3,000 pictures of Carolina Playmakers productions from 1946-1984, a rich visual history of Southern theater. 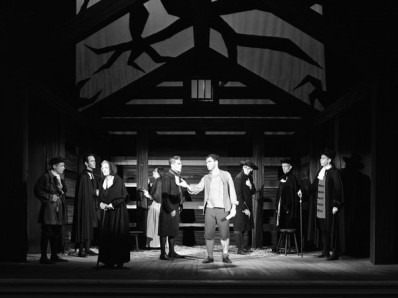 The UNC Photographic Laboratory collection spans over forty years of university history, and that includes a faithful photographic representation of many major productions of the Carolina Playmakers Repertory Company. The collection, housed in the North Carolina Collection Photographic Archives, includes over 3,000 photos of Playmakers productions, from 1946 to 1984, offering a vivid glimpse of Southern theater history in the twentieth century.

Many of these photos are for publicity purposes, including posed character photos used for promotional posters or programs, stills of dramatic moments during a play, and important persons (such as visiting artists and speakers) and moments (cast and crew of a show about to go on tour). Many of these were used in the school yearbook, the Yackety Yack, and student publications as well as publicity materials. There are also a number of behind the scenes and candid photos, including shots of sets being built, playwrights at work, students being taught to apply stage makeup, rehearsals, cast awards and dinners, and displays of props, programs, and posters.

Southern plays and writers are well-represented, especially UNC students and alumni (Andy Griffith appears here, as well as a number of Broadway stars), while new nationally-recognized and prize-winning shows appear soon after their New York or London debuts. Popular mainstream spectacles and musicals are produced in the same season as cutting-edge, experimental dramas, and the names of student writers appear on posters next to Shakespeare, Miller, Shaw, and Rodgers and Hammerstein.

In these photos, visible changes in culture and American theater can be traced. Clear changes in racial attitudes can be seen, from the use of blackface makeup in early photos to inter-racial casting increasingly common after the mid-1960s. Plays with greater numbers of female roles or with stronger focus on gender, racial, and cultural issues also become more common in later years. Equally clear is that the Playmakers have a strong and lengthy tradition of producing challenging plays – also included are a number of pictures of Arthur Miller’s The Crucible, an allegory of McCarthy-ism and communist “witch hunts” of the 1950s, which was produced in 1954 – just one year after its Broadway premier and still very much in the midst of the politically charged atmosphere that inspired it.

What is most apparent in this group of photographs is how much is here for any scholar or student of the theater as well as any fan of the stage.