A few years ago, the North Carolina Collection acquired a set of Soviet-made maps, featuring North Carolina towns and dating from the late 1970s. See if you can guess which town is pictured below (and the feature just to the top left of that town). The top image shows the name of the town, and the bottom image shows the town itself. 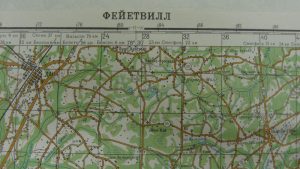 “[The ailanthus tree] rarely lives more than 50 years, so any chance of finding [Betty] Smith’s original tree still growing in Brooklyn was out of the question.
“But [Nancy] Pfeiffer told me about the ailanthus her mother planted in the walled-in garden behind her home in Chapel Hill, where Smith lived almost her entire life and where she is buried. Back in 1945, when 20th Century Fox came out with the movie version of Smith’s book (directed by her former Yale classmate Elia Kazan), someone had the clever idea to send ailanthus saplings out to critics….
“Pfeiffer is quite sure the tree [shown in an old photo of the Chapel Hill garden] is one of the saplings from that early publicity campaign. Later on, however, they had to take the tree down when it threatened to topple the garden wall.
“Betty Smith and her family took shoots from the aforementioned ailanthus and planted them around [their] cottage on the Outer Banks of North Carolina. In 1993, the cottage and an ailanthus from one of those shoots had to be moved back from the shore because of erosion. The tree continued to grow tall until the house was sold in 2002. Since then the house and tree have been… replaced by a large rental unit.”
— From “Seeds: One Man’s Serendipitous Journey to Find the Trees That Inspired Famous American Writers….” by Richard Horan (2011)