Can you name the future terrorist who…

…served as president of the UNC Chapel Hill Psychology Club? 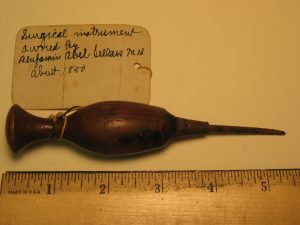 October’s Artifact of the Month is a surgical instrument used by Dr. Benjamin Abel Sellars (1816-1896), a native of Alamance County. An aging identification tag indicates that the tool may have been used in the 1850s when B.A. Sellars, as the doctor was more commonly known, moved to Randolph County to practice medicine.

According to Alamance County: The Legacy of Its People and Places, Sellars’ father, Thomas Jr., was a prominent cotton planter in Orange and Alamance counties during the late eighteenth century. Sellars attended medical school at the University of Pennsylvania. After graduation in 1844, he moved to Randolph County to practice medicine. There he met his wife, Frusannah Elizabeth Kime (1833-1922). The two had eleven children (depicted in the photograph below). Records indicate that Sellars also practiced for an unknown length of time in Guilford County, perhaps during or after working in Randolph County.

Sellars moved to Company Shops, North Carolina by the early 1870s and opened up a small store there. Remarkably, the store would stay in business until the 1980s, lasting through the city’s evolution from Company Shops to Burlington.

And so, this story brings us to this ambiguous artifact…

This tool could have been used as a surgical probe, which allowed doctors to examine a particular area of interest, or a cauterizing tool, which would be heated and then applied to an open wound to encourage healing. Barbara Tysinger, the Cataloging and Resources Manager for UNC’s Health Sciences Library, suggests that the tool could have been used in a procedure known as trephination, the process of carving a small hole in an individual’s skull with the purpose of relieving pressure. Our handheld instrument may have in fact been an awl used to aid in this process.

Regardless of whether it is a probe, an awl, a cauterizing tool, or something else, the origins of this item are a testament to the remarkable people and objects that make our Tar Heel past so memorable in the present. 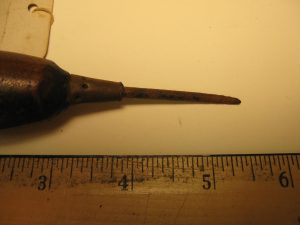