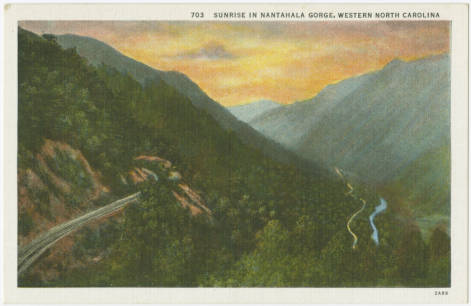 In the May 31, 1893 issue of the Asheville Daily Citizen, Rowland Howard describes his ride along the Nantahala River on horseback: “Riding along the rushing river with high mountain walls one either side, one realizes the grandeur of the scenery ten fold more than one could on the railroad train.”

Nantahala, meaning “land of the noon day sun,” was so named by the Cherokee Indians for its dense, lush vegetation in which sunshine only reaches the forest floor at high noon.

Visitors today create an $85 million impact on the local economy as they raft down the river with the Nantahala Outdoor Center or another of the area’s numerous rafting outfitters, ride the Great Smoky Mountain Railroad alongside it, and frequent the area’s other attractions, restaurants and lodging establishments.

Read more about the economic impact of rafting in the area and the role of Duke Energy’s Nantahala Hydroelectric Project in its success, here.