Why would the Yankees engender such fan interest east of I-95? Could it be residual reverence for Catfish Hunter? Or a previously underestimated  in-migration of  New Yorkers?

Neither, apparently. As Business Insider observes, “The Yankees are the default team in areas without a team close-by: Louisiana, southern Virginia, New Mexico, Utah, etc.”

“Baseball history was made at Oates Park in Asheville, North Carolina, on August 30, 1916, but nobody noticed. In fact, nobody noticed until some 50 years later —  and even then the discovery was accidental and did not receive the lasting attention it deserved. On that day, two baseball teams in the Class D North Carolina State League played a nine-inning game in only 31 minutes….

“Only some 200 fans witnessed this historic event — perhaps because it ended before it was scheduled to start.”

— From “Quicker Than Quick: A 31-Minute Professional Game” by Wynn Montgomery in Baseball Research Journal (Fall 2011).”

“The Augusta National golf course’s most distinctive feature is the bright white sand in its bunkers.

“However, contrary to Augusta lore, that sand is not ‘feldspar sand,’ according to Drew Coleman, professor of geological sciences at UNC Chapel Hill.

“Feldspar is ‘dirty quartz,’ that is, quartz that contains other elements like aluminum and potassium. If you went to a beach in North Carolina, you’d find about 88 percent of the sand is quartz, while 10 percent is feldspar.

“The Spruce Pine Mining District in North Carolina is famous for its feldspar and quartz, and since the 1700s feldspar has been mined there. When they mine the feldspar for aluminum, they just discard the quartz. What we call ‘feldspar sand’ is a waste byproduct, Coleman said, and there’s likely not any feldspar in it.”

” ‘That’s why the bunkers are so white,’ Coleman said. ‘Spruce Pine quartz is the best in the world, and the quartz created from the feldspar mining process is so white and so pure.’

“More recently, the quartz has become more valuable than the feldspar, according to Coleman. The same stuff in those Augusta National bunkers is now used for silicon chips.”

— From “The bunkers at Augusta National are spectacular, but they are not ‘feldspar’ sand” by Mike Walker at golf.com (April 8, 2011) 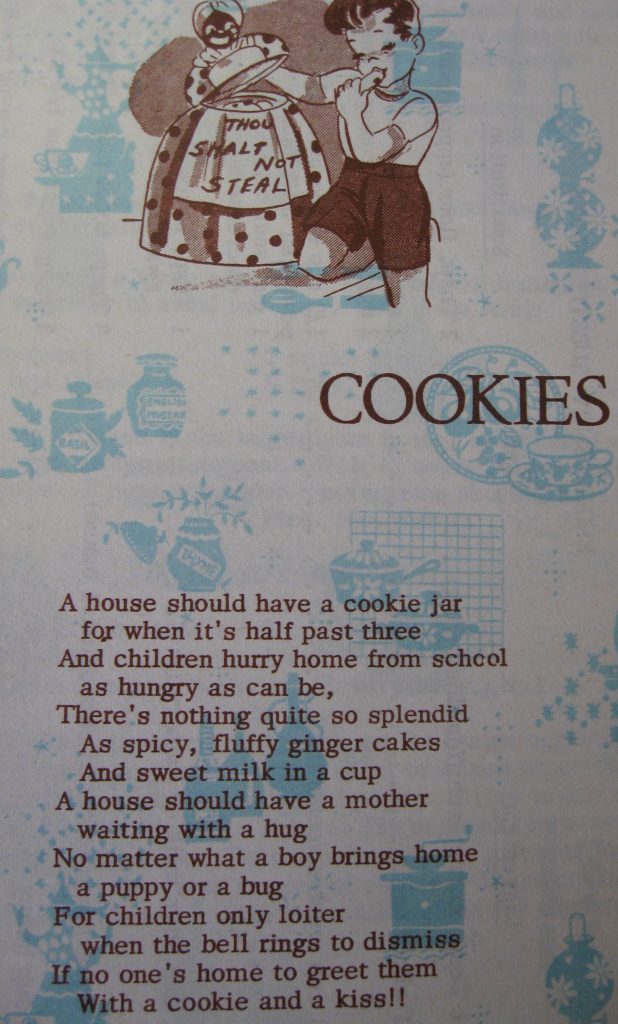 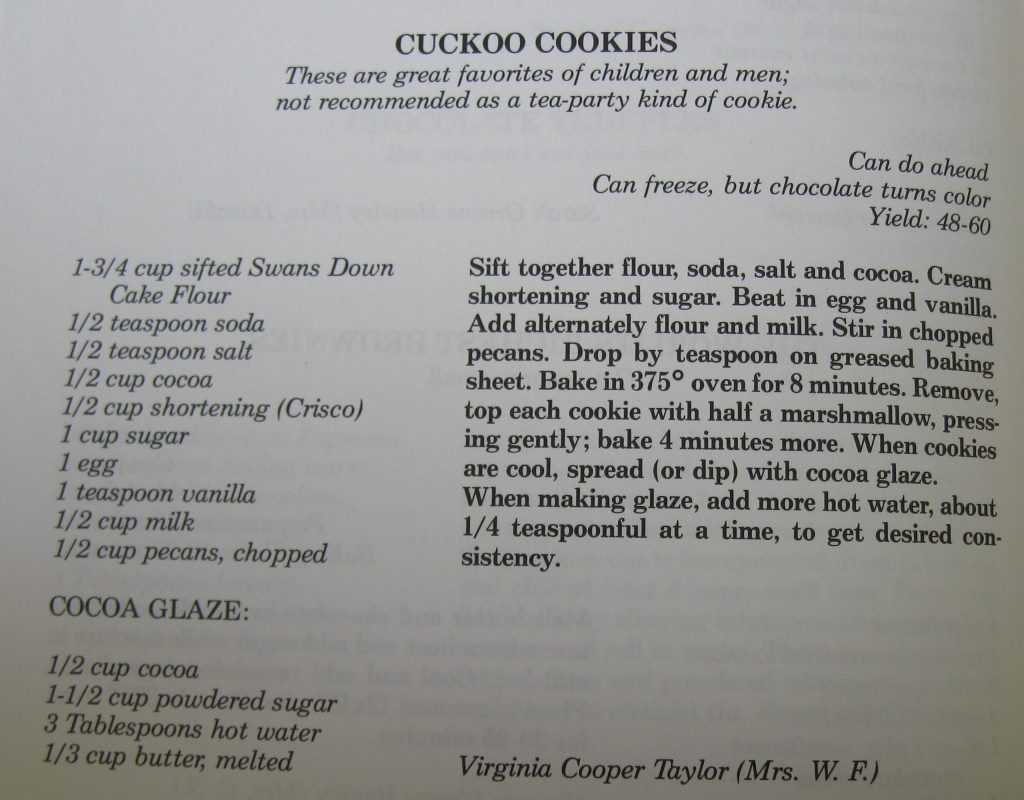 Cuckoo Cookies from Mountain elegance : a collection of favorite recipes.

Pie Crust Cookies from Pass the plate : the collection from Christ Church.

Mrs. Allen’s Ginger Puffs from Our own kitchen survival kit.

” ‘The army burned everything it came near in the State of South Carolina,’ Major [James] Connolly concurred, ‘not under orders, but in spite of orders…. Our track through the State is a desert waste.’

“But, Connolly added, ‘Since entering North Carolina the wanton destruction has stopped.’ It was true…. North Carolina was not a part of the Deep South, was known to harbor significant Unionist sentiment, and had been one of the last states to secede [the last, in fact]….

“The abrupt cessation of the maelstrom that engulfed South Carolina formed one of the strongest proofs of the sense of discriminating righteousness that animated the Federal rank and file. For some it had an Old Testament flavor to it….” 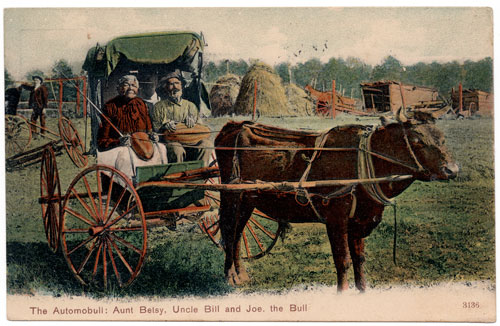 We pride ourselves on quick responses in the North Carolina Collection. But in one instance (and I’d like to believe it’s just one), we failed.

In April 2010, we featured this postcard of Aunt Betsy Holmes, Uncle Bill and Joe the Ox on North Carolina Miscellany. We have several different postcards of Aunt Betsy, her bull and the carriage. And four years ago, my colleague Bridget Madden asked if anyone could supply more information about Aunt Betsy (sometimes spelled Betsey). Three months later Pearl Bell Follett suggested that we check the papers of Alfred Mordecai in the Southern Historical Collection here at Wilson Library. Follett said that we could find mention of Aunt Betsy in a paper on medicinal plants written by Mordecai.

We failed to follow up on Follett’s lead. And we may have never done so if we hadn’t gotten a gentle nudge from Adrienne Berney, a colleague in the N.C. Department of Cultural Resources. She posted a comment on the original blog post asking,”Has anyone in the library followed up with Ms. Follett’s reference to learn more about Aunt Betsy?” Then she added, “If so, please continue blogging on the topic! We need local color (and memories of it) in Raleigh.” 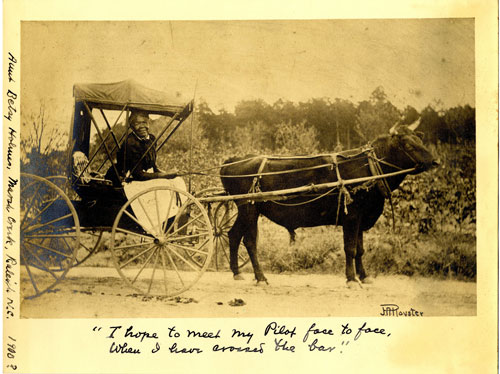 Mordecai was a major in the U.S. Army Medical Corps and based at Fort Benning, Ga., when he wrote “Common Plants of Medicinal Interest, Fort Benning Reservation” in 1934. The paper was prepared for the garden section of a women’s club at Fort Benning. And Mordecai, a Raleigh native and a descendant of Moses Mordecai, dedicated his work to Aunt Betsy and Uncle Billy Holmes. He describes them as “a gentle and lovable old couple of the colored-race; ex-slaves and relics of plantation life before the days of 1865.”

Aunt Betsy, according to Mordecai, was a familiar site at the Raleigh city market, where she ran a small stand selling garden herbs and medicinal plants. Market goers might find such items as thyme, sage, hoar-hound, rosemary, lavender leaves, red peppers, sassafras roots and hearth brooms made of field straw or sedge.

In winter she had holly with pretty red berries; sometimes mistletoe and teaberries. In the spring there were little posies of trailing arbutus. In the summer big bunches of daisies; and, in autumn, goldenrod and bunches of brightly colored autumn leaves along with a few pumpkins.

Mordecai adds that Aunt Betsy kept her carriage, with Joe the ox still attached, nearby. And from there, he writes, “she ran the more serious business of crude drugs, such as Snake-root, Pink-root, Lions-tongue, Indian-physic, Cramp-bark, Cat-nip, Golden-seal and the like.” Aunt Betsy’s customers for these items were mostly African-Americans. “But curiosity led the whites there, too,” according to Mordecai. “And no doubt many an intelligent citizen laughed in ignorance at the funny assortment which they regarded as so much conjure.”

Aunt Betsy and Uncle Billy lived near Marsh Creek about three miles north of Raleigh. The rafters of their house contained bunches of drying herbs and gourds “filled with interesting things belonging to her trade.”

As a boy, Mordecai recalls, he visited Aunt Betsy and Uncle Billy. “What are those funny roots, Aunt Betsy,” he asked. “They smell sort of sweet, but aren’t they dried up and ruined?”

Mordecai, who later served as health officer in Davie, Yadkin and Stokes counties, writes that on his visits to the couple’s house, he often found Uncle Billy sunning by the back door. 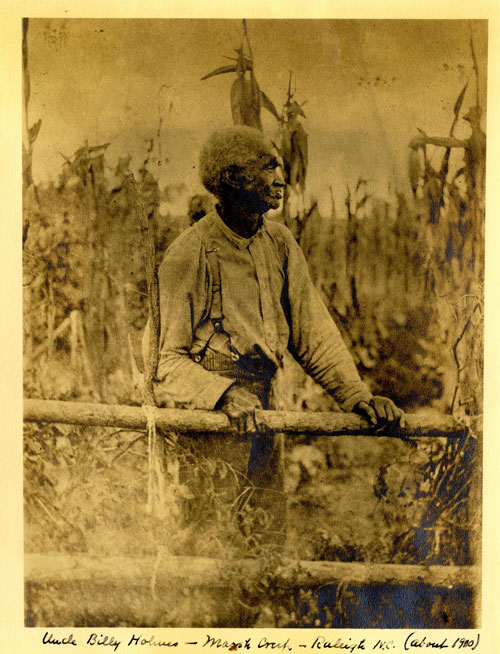 Mordecai recalls that Uncle Billy, who had served as carriage driver for Henry Mordecai during the ante- and post-bellum periods, was “well in his nineties” when he visited. But the old man still would led the young boy on hunts for rabbit. 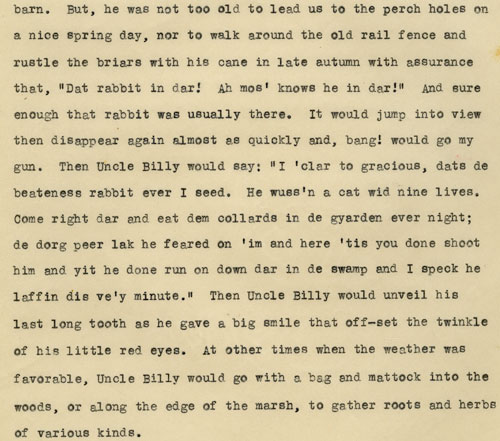 Mordecai provides no other details about the couple. But he credits them with inspiring his interest in “crude drugs” and botany.

Perhaps there are other stories about Aunt Betsy and Uncle Billy. Please let us know if you come across them.

“Because Aunt Maggie hailed from Asheville, North Carolina, and was born near the turn of the century, my brother reasoned that she could likely recall members of the family who were born into slavery….

“Aunt Maggie, who had been sharing her memories willingly… suddenly snapped: ‘We don’t talk about that in this family.’ She added that there were stories he didn’t need to know, that she did not intend to share and that would accompany her to the grave. She then turned away, stared off into some unseen place and with her body language and stony silence marked the end of the conversation…..

“My grand-aunt was participating in a longstanding practice of editing her memory, an artful forgetting for the sake of affirming her family’s social position. Hers was a logic that middle- and upper-class blacks consistently relied on in the early years of the civil rights movement…. By narrating a history that was only about good breeding, [they] could preserve their respectability in black America during a era of profound social, economic and political change. They could also retain their positions as the interpreters of blackness for the white community.”

— From “Jim Crow Wisdom: Memory and Identity in Black America since 1940”  by Jonathan Scott Holloway (2013)

Sir Henry Yelverton, the king’s attorney general, was no friend to Sir Walter Ralegh. Yelverton owed his office to the influence of the Howards, the great and powerful Catholic family, secret pensioners of the king of Spain and long-time virulent enemies of Ralegh. And yet, in the attorney’s solemn address before the King’s Bench at Westminster on October 28, 1618, expressing His Majesty’s pleasure that Ralegh should die, there is a strange note of piety, of awe even, in the face of Ralegh’s destiny: ‘He hath been a star at which the world hath gazed; but stars may fall nay they must fall when they trouble the sphere wherein they abide.’ These words catch the sense, felt even in his own day, that Ralegh’s life had a very special quality, something almost mythic, something usually found only in the creations of art, which set it apart from the lives of other men. Ralegh himself did everything in his power to encourage such a feeling, for he was an actor, and at the great public moments of his career he performed unforgettably.

–from Sir Walter Ralegh: The Renaissance Man and His Roles by Stephen J. Greenblatt.

Greenblatt paints Ralegh (to use one of numerous ways to spell the man’s name) as an actor. Here at N.C Miscellany, we’d like to turn that around. How many actors have played Sir Walter on film and television?

In these days of the Web and IMDB it’s not too hard to find the answer. But before you go there, try to name as many as you can.

And why are we thinking about Sir Walter as a film character? Because Ralegh as a subject in film and literature is one of the topics of discussion for an event we’re sponsoring on April 1. We’re marking the 400th anniversary of publication of Ralegh’s The History of the World with a discussion among three men who’ve looked at aspects of Ralegh’s life and work. Christopher Armitage, who teaches in UNC’s Department of English, recently edited a volume titled Literary and Visual Ralegh. He’ll be joined by two contributors to the volume–Thomas Herron of East Carolina University and Julian Lethbridge of the University of Tübingen in Germany. Their discussion takes place at 3 pm in the Pleasants Family Assembly Room in Wilson Library, just down the hall from the North Carolina Collection. We hope you can join us.

“The particular goal of [two large dances in 1943 sponsored by American Legion and VFW posts] was to raise enough money to send a million cigarettes to soldiers overseas…. Both groups almost made it. Each sent more than 900,000 cigarettes, and on the back of each pack was the message, ‘The Citizens of Charlotte, N.C., Send Christmas Smokes for Our Overseas Fighting Folks’….

“[But] during 1944, with vast numbers of cigarettes earmarked for the military, cigarette rationing began…. Home-front smokers were more concerned with getting their own cigarettes, and no one sponsored programs that would send more cigarettes overseas.”