Was it serendipity? Or the hand of providence?

As the staff of the North Carolina Collection Gallery prepared for our exhibit on the Carolina Playmakers, we contended with a number of difficult decisions about what to include. With dozens and dozens of playbills from which to select, sometimes the choice came down to factors as arbitrary as color.

Whatever the reason for it, we’re glad we selected this 1942 playbill — and we’re not the only ones. 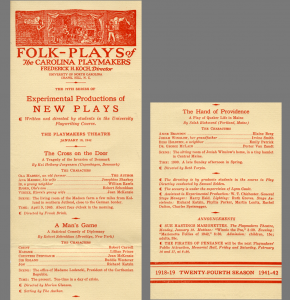 The playwright of the second play on the bill, A Man’s Game, was Robert Schenkkan, a UNC student from Brooklyn, New York. The role of Countess Stephanie in A Man’s Game was played by the lovely young co-ed Jean McKenzie.

After graduating from UNC, Schenkkan and McKenzie were married and had a son named after Robert. Robert Jr. would go on to become a professional, Pulitzer Prize-winning playwright.

Through a lucky twist of fate, a friend of the younger Schenkkan visited the exhibit and saw the older Schenkkan’s name on the playbill. Mr. Schenkkan contacted us and we were pleased to offer him a copy of his father’s play.

Is it any surprise that the third play on the bill is called The Hand of Providence?

The exhibit “Making a People’s Theatre: Proff Koch and the Carolina Playmakers” has been extended through June 15, 2014. Who knows — there may be a serendipitous surprise in store for you, too!