Ideas about what constitutes portability have changed dramatically over the past 150 years. One piece of evidence for this (extremely non-controversial) claim is our July Artifact of the Month, a 19th-century lap desk. 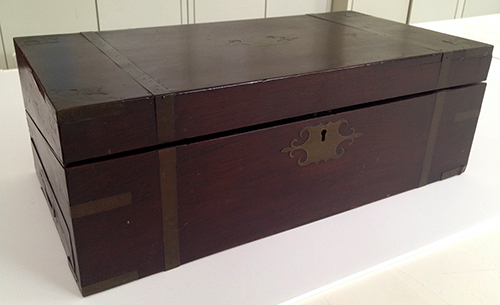 Lap desks, popular in the 19th-century, enabled their owners to do their writing on the go. A lap desk provided an expansive flat writing surface that folded up neatly into a (relatively) compact box, as well as storage for ink wells, sand wells, pens, and quills.

This particular example belonged to Caroline Lee Hentz, an author and anti-abolitionist from Massachusetts. A prolific writer, Hentz produced a long list of poems, plays, romantic novels, and short stories — some of them, perhaps, written on this desk.

Hentz moved to North Carolina with her husband when he began a position as a language professor at UNC. In Chapel Hill, Hentz met the enslaved poet George Moses Horton and became a great supporter of his work. Hentz’s 1833 novel Lovell’s Folly included an enslaved poet named George, who was openly based on Horton. She served as a benefactress to Horton, helping to edit, promote, and support the publication of his work.

Oddly, Hentz was also one of the era’s most influential defenders of slavery. Her widely-read novel The Planter’s Northern Bride is a direct reply to Harriet Beecher Stowe’s abolitionist work Uncle Tom’s Cabin. In Lovell’s Folly, George, admired for his poetry, is granted his freedom. However, as a plot device that reinforced Hentz’s belief that benevolent masters offer slaves a good life, the character George chooses to stay on the plantation.

The real Horton worked tirelessly in an effort to buy his own freedom.

Works by Hentz and Horton, including one of Horton’s poem manuscripts, can be seen in the North Carolina Collection Gallery’s current exhibition. Set in the Southern Part of Heaven: Chapel Hill Through Authors’ Eyes features 35 books by both professional and amateur writers. Included are historical accounts, short stories, mysteries, and even a fantasy-tinged romance with scenes that take place in Gimghoul Castle. Full details can be found on the Library’s blog.