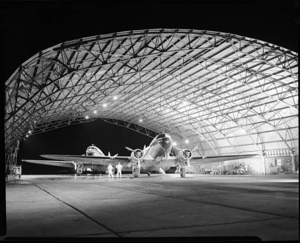 Take flight into our most recent installment of This Month in North Carolina, which discusses the origins of Piedmont Airlines in Winston-Salem, NC.  Tobacco and aviation are linked more closely than I’d ever imagined!

Piedmont Airlines’ inaugural passenger flight took place on Friday, February 20, 1948 at around 7 a.m.  It left Wilmington, made several stops along the way to Cincinnati, OH, and then made the return trip home.

The photo above is from the Hugh Morton Collection of Photographs and Film, and shows two of Pidemont Airlines’ DC-3s parked in a WWII hangar they were using as a base.  The photo is dated to ca. 1948, the same year as their first passenger flight.


Thomas H. Davis was born in Winston-Salem in 1918, and grew up in a family of successful businessmen. His father worked as an executive for R. J. Reynolds Tobacco, a relationship that would later be crucial for the story of Davis’s own success story and for commercial aviation in Winston-Salem. Davis had an interest in planes and aviation from a young age and began taking flight lessons on the sly when he was 15 or 16 years old at the Winston-Salem Airport.

In 1939, Davis began working as a salesman for the Camel City Flying Service, an aviation company owned by R.J. Reynolds, Jr. As a salesman, Davis’s job was to fly planes to potential customers. He enjoyed the work so much that he put his college career on hold to take a full-time job with company. Camel City Flying Service was in debt, and Reynolds had a vested interest in its success. At the time, he was gearing up to run for mayor of Winston-Salem, and wanted to see his town and companies do well. Furthermore, North Carolina was a major manufacturing center for textiles, tobacco, and furniture, but was cut off from the distribution centers in the Midwest. Reynolds offered to sell the Camel City Flying Service to Davis if he could bring the company out of debt. He did, and in 1940, the company was reincorporated under the name of Piedmont Aviation. At the time, Davis was only 22 years old.

Piedmont applied to the Civil Aeronautics Board (CAB) in 1944 for a contract that would recognize them as a feeder airline operating passenger, mail, and cargo routes to many North Carolina towns, as well as branching out for a few longer trips. So many companies applied for this contract that it took the CAB several years to make their decision. Although Piedmont Airlines was awarded the contract in 1947, their initial service was held back by competition from other small airlines, including State Airlines, a company based in Charlotte. State Airlines petitioned the CAB with a similar service plan, but was not awarded the contract. They brought a case to the Supreme Court that took several months to iron out before deciding in favor of Piedmont Airlines.


Four years after submitting their application to the CAB, Friday, February 20, 1948, at around 7:00 am, Piedmont Airlines launched its first passenger flight. The flight took off in Wilmington, made several stops along the way, and landed in Cincinnati at 12:24 pm. The plane then made its return trip and landed back in Wilmington at 7:19 pm. The DC-3 plane Piedmont Airlines was flying at the time could carry up to 28 passengers, a pilot, co-pilot, and a purser.

Early regional airlines like Piedmont Airlines modeled their schedules after the railroads. Piedmont Airlines had proposed a system of several routes to connect small cities in North Carolina. The first flight followed a route that began in Wilmington, made stops in Southern Pines; Charlotte; Asheville; the Tri-Cities, a regional airport serving Tennessee and Virginia; Lexington, KY; and Cincinnati, OH. Because of their fast schedules and quick time spent on the ground, Piedmont’s planes earned the nickname “puddle jumpers.”

Despite their lowly nickname, Piedmont Airlines quickly became known for its famous balance between excellent customer service and spartan accommodations. An anecdote recounted in Elliott’s Flight of the Pacemaker mentions how the pursers picked up Krispy Kreme donuts on their way into work for flights leaving out of Winston-Salem, but that was one small comfort in a crowded cabin that was hot in the summer, cold in the winter, and unpressurized.

The airline’s reputation and customer base grew steadily, as did its good relationship with the CAB. Piedmont Airlines jumped a much bigger puddle and made its first international flight to London in 1987. In 1989, USAir acquired Piedmont Airlines. 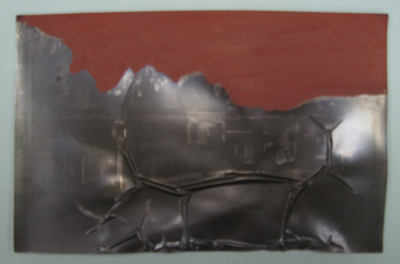 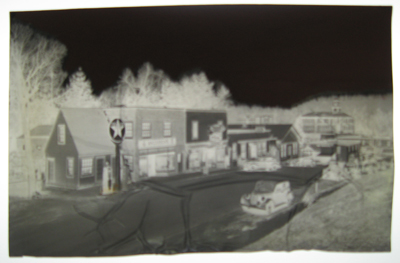 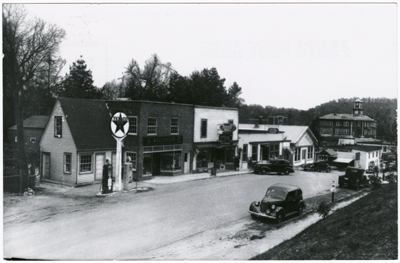 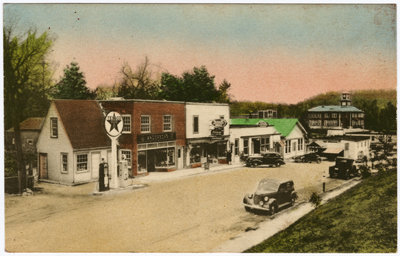 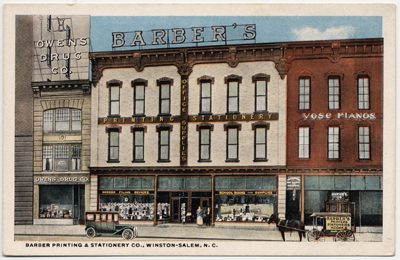 Several postcards and a few pamphlets/books here in the NCC were printed by the Barber Printing & Stationery Co. in Winston-Salem, NC.  I’m not sure exactly when it was founded, but it appears in the 1910 city directory for Winston-Salem.

I wasn’t able to find out much about their business other than they were a printer and a purveyor of office supplies.  Their office was located at 209 W. 3rd Street, and appears in the postcards above and below. 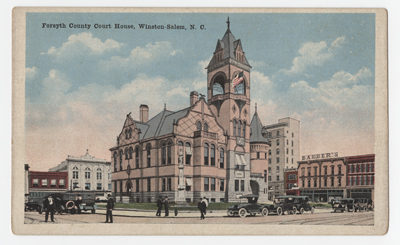 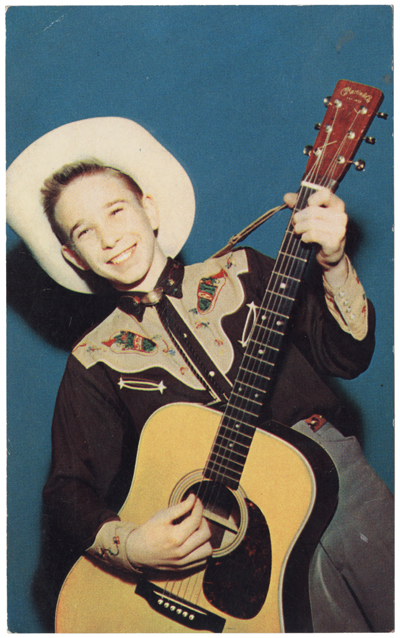 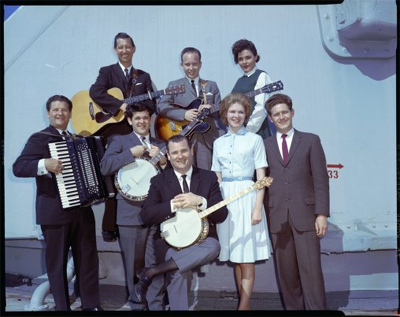 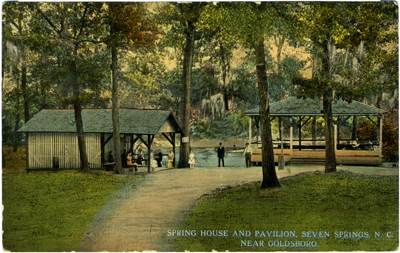 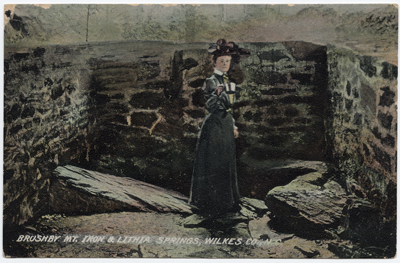 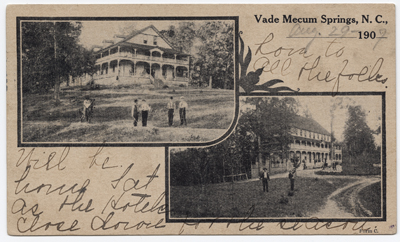 We recently designed a display case in the NCC’s reading room that shows postcards from a variety of therapeutic destinations in the early 20th Century.  We’ve selected postcards showing sanitariums, healing springs, and coastal resorts to illustrate the different types of accommodations that became increasingly more popular after the establishment of the railroad in North Carolina.  We’ll post a blog entry for each type of institution over the next few weeks. 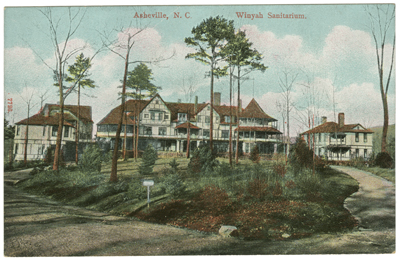 In an effort to treat patients with tuberculosis, sanitariums were built across the state, but many were located in Western North Carolina.  These facilities boasted clean, fresh air, restful scenery, and a slew of attendants and physicians to care for their ailing clients.

The railroad to Asheville was completed in 1882, making travel to Western North Carolina more convenient for those seeking to access the sanitariums and healthy climate of the mountains.  Pamphlets for both the sanitariums and railroads at this time often advertise their services in tandem:

This excerpt from a Southern Railway pamphlet, ca. 1898, is a prime example of how the railroad company used the benefits of Western North Carolina’s climate to laud their own service.

More postcards of sanitariums can be viewed online here.

UNC Greensboro and the North Carolina Center for the Book have collaborated to develop their new Web-based tool, A Literary Map of North Carolina.  You can use the map to browse by geographic location, author, or genre. 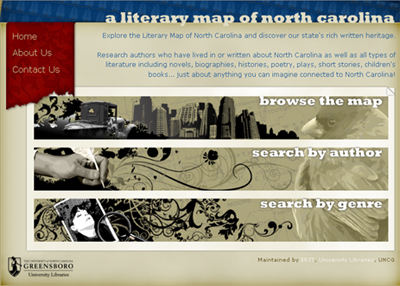 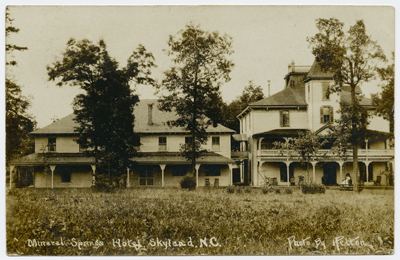