On this day in 1965: Staff Sgt. Barry Sadler, recuperating at Fort Bragg from a punji-stick wound suffered in Vietnam, records “The Ballad of the Green Berets.” The tribute to his Special Forces comrades (“Fearless men who jump and die. . . . Men who mean just what they say. . . . “) will spend five weeks atop Billboard’s Top 40 list and become the best-selling single of 1966.

The Special Forces, an elite unit created by President John F. Kennedy in 1961, are headquartered at Fort Bragg. At the height of the Vietnam War they number about 15,000 men.

Despite the success of “Green Berets,” the nation is fast losing its appetite for war, reinforcing Sadler’s prediction that “In two years I’ll be forgotten.”

Back when a visit from Tiger Woods didn’t evoke such conflicted feelings, he spent four days training with the Green Berets to better understand what his father, Earl, had experienced at Fort Bragg 40 years earlier.

This plastic tag was issued for a golf exhibition  Woods gave afterward. 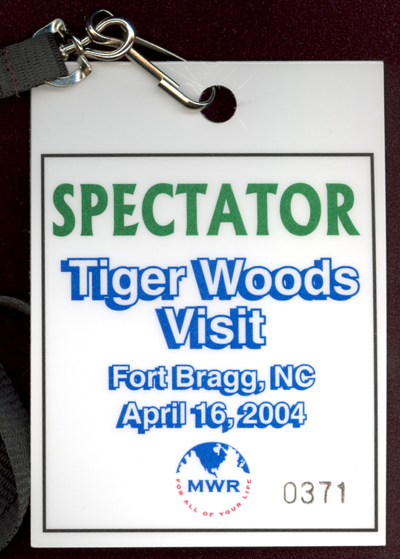