“Serving as North Carolina’s attorney general in 1780, [James] Iredell complained to his wife about the work of North Carolina’s lawmakers, calling it ‘the vilest collection of trash ever formed by a legislative body.’ ”

— From “The Will of the People: How Public Opinion Has Influenced the Supreme Court and Shaped the Meaning of the Constitution”  by Barry Friedman (2009)

“In certain Southern places, the economic crisis of the 1890s drove Populists and Republicans into each other’s arms…. Fragile biracial coalitions elected ‘fusion’ tickets in Alabama, Georgia, Texas and — most successfully — in North Carolina….

“Between 1894 and 1898, the fusionist legislature required ‘The School History of the Negro Race in the United States’ to be taught in North Carolina public schools; it also raised money for education and poor relief by increasing taxes on railroads and other corporations….”

“Legislators in North Carolina have proposed a bill declaring that the First Amendment to the U.S. Constitution, which prohibits the government from establishing a state religion, does not apply to the state. [The bill has now been declared DOA in the N.C. House.]

“North Carolina is no stranger to breaching the wall between church and state: Article VI, Section 8 of the state constitution already bars nonbelievers from holding office. Although the law has been declared unconstitutional, it remains on the books.

Among those contributing their expertise: Michael Gerhardt of the University of North Carolina School of Law.

“With the convening of the legislature, agitation for tax reform increases…. Prominent industrialists have stated that the state is beginning to suffer acutely as a result of the burden of tax upon industry. In fact, many industrial enterprises have gone to Alabama, Georgia, Florida and other states recently to escape the burden of taxation in North Carolina.”
– From “Tax Reform Looms in North Carolina” in the Wall Street Journal (Jan. 5, 1927)
–

“Reporters have to battle a growing attitude on the part of state and local officers that public business is none of the public’s business. Last week North Carolina newsmen lost a round. When a vital Appropriations subcommittee, disregarding state law, denied them access to its budget hearings, capital reporters staged a sitdown in the hearing room.

“To dodge the reporters, the stymied committee rented a hotel room, met secretly there. Reporters heard about it, crowded outside the locked door. Committee Co-Chairman J. William Copeland stepped out to offer a compromise: He would let the newsmen in if they agreed not to report anything the committee wanted off-the-record. The reporters flatly rejected the proposal…. 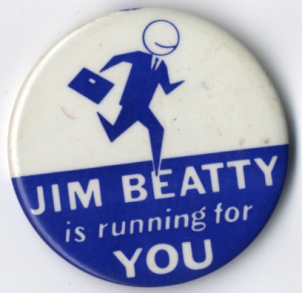 On this day in 1962: In a meet at the Los Angeles Sports Arena, Charlotte-reared Jim Beatty, a UNC Chapel Hill alumnus, runs the mile in 3 minutes, 58.9 seconds — the first time the 4-minute barrier has been broken on an indoor track.

Pictured: A pinback button promoting Beatty’s candidacy for the N.C. House, where he represented Mecklenburg County for six years.