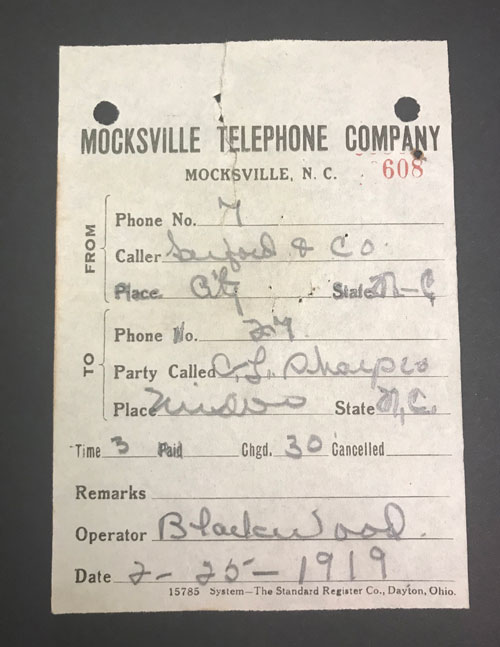 The first telephone exchange in the state opened in Raleigh in 1879. Service to less urban areas came slowly – Mocksville’s began in 1904.  If I’m reading this 1919 receipt correctly, it shows that a three-minute call from  Sanford Motor Co. in Mocksville to C. L. Sharp Co., a produce dealer in Winston-Salem, cost 30 cents.
.

“On Dec. 16, 1948, Ray Hewitt installed a telephone in the home of Mr. and Mrs. W. J. Pace in Alamance County — the millionth rural telephone added by the Bell System since the end of World War II….

“[Hewitt’s wife] Martha, a telephone operator in Burlington, made the connections so Pace could speak with President Truman at the White House. (The president’s number: National 1414.)

” ‘The president’s words cannot be heard,’ the Southern Telephone News would report later, ‘but whatever he is saying seems to be pleasing farmer Pace. Mrs. Pace smiles as she watches her husband and looks mighty proud.’

“Everyone seemed to be crammed into the Paces’ farmhouse that day. There was a film crew. The ceremonial calls, broadcast live by WPTF in Raleigh, were carried by 16 N.C. stations.

— From “President Truman on the line” by Mark Wineka in the Salisbury Post (Jan. 5)