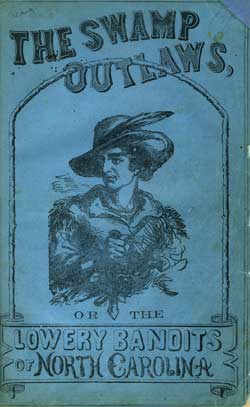 On March 3, 1865, Allen Lowry and his son William were tried in a hastily organized sham court, declared guilty of theft, and executed in Robeson County. While William was almost certainly a member—and perhaps even the leader—of a gang that committed robberies, it is unlikely that the elderly Allen was involved in any raids. What is certain is that the two men’s deaths sparked North Carolina’s famous Lowry War, a seven-year period of raids, robberies, and murders.

After the outbreak of the Civil War, many Lumbee Indians living in Robeson County were conscripted to work on the construction of Fort Fisher. To avoid forced labor and the Confederate Home Guard conscription officers charged with enforcing it, many Lumbee men camped in the woods and swamps near their homes and depended on friends and relatives for subsistence. For a community already facing desperate times, this practice, known as “laying out,” was taxing.

By December 1864, the riches of their more affluent neighbors became too tempting for four of Allen Lowry’s sons and they stole two hogs from wealthy slaveholder James P. Barnes. Several months of local troubles followed this theft. Barnes suspected the Lowrys, and when he attempted to have them captured, he was shot by a gang that included at least two Lowry brothers. In January 1865, the Lowrys killed J. Brantly Harriss, a local man who had murdered three of their cousins. They also raided the Robeson County Courthouse, stealing guns and ammunition which were then used in a series of February raids against the area’s rich planters.

On March 3 the Home Guard searched farms and homes and questioned suspects, eventually finding stolen guns, clothes, and a gold cane-head at the home of Allen Lowry. They promptly arrested Lowry, his wife, five of their twelve children, and a young woman who was visiting them. The suspects were taken to a nearby plantation and the Guard quickly convened their own version of a court of law. During the trial William Lowry attempted an escape with the aid of one of his brothers. He was shot and recaptured, but the escape attempt brought the court to a swift decision and the members voted to execute Allen Lowry and his sons Calvin, Sinclair, and William. Shortly thereafter, Calvin and Sinclair were given a reprieve because no stolen items had been found on their property or persons. That evening, William and Allen were taken back to the Lowry property, bound to a stake, blindfolded, and shot.

One journalist wrote that “[f]rom a thicket near at hand Henry Berry, the son of Allen Lowery, saw the volley fired which laid his brother and father bleeding on the ground. There he swore eternal vengeance against the perpetrators of the act.” Thus, not only did the executions fail to stop the raids, but they served to further exacerbate local tensions and made the Lowrys determined to get revenge upon the prominent persons that had wronged their family and community. After the Civil War ended, Henry made raids a constant part of local life, organizing a small band of men and coordinating their attacks on local plantations. For years these “swamp outlaws” stole from the wealthy, evaded prosecution, and killed law enforcement officers that tried to arrest them. During what came to be called the “Lowry War,” the band carefully directed their actions toward the community’s more affluent citizens. This earned them popularity and Robin Hood-like reputations among the area’s poorer citizens.

The Lowry Band committed its last major act of outlawry on 16 February 1872, raiding Lumberton and escaping with $1000 worth of goods and a safe filled with over $20,000. Shortly thereafter, Henry Berry Lowry disappeared completely and the $12,000 reward for his capture went unclaimed.

The stories surrounding Henry Berry Lowry’s fate range from the plausible to the incredible. Among the claims are that he died of a gun-shot wound; drowned; faked his own death; or was smuggled out of the area in a tool box. At least one report claimed that he fled to South America; another said that he escaped to the northwest and led the Modoc Indians in their 1872-1873 war against the federal government in Oregon. Still others claimed that he never left the area. As late as 1937 Lowry’s great-nephew, Dr. Earl C. Lowry, claimed that his uncle was still alive.

Although his ultimate fate is unknown, the legend of Henry Berry Lowry and his band of outlaws has never died. They became folk heroes, with one journalist in 1872 calling them “the Rob Roys and Robin Hoods” of Robeson County. Lowry’s influence continues today: the Lumbee community’s highest honor is named for him, several novels and plays have been written about his exploits, and since 1976 a musical drama entitled Strike at the Wind! has been performed in Robeson County every summer.

“Rhoda Lowrie. Widow of Noted Outlaw in Jail for Retailing Liquor Without a License,” Robesonian, 10 November 1897.