When we put up the fun and instructive “Talk Like a Tar Heel” website a few years ago, there were plenty of comments from around the state. Many of these were in the form of polite corrections to some of the pronunciations given on the site.

One of the place names that came up most often was Edgecombe County. The debate was whether the first syllable should be accented (as in “EDGE-cum”) or whether the stress was placed equally on both syllables (as in “EDGE-COMB”). I’ll leave it to current residents of the region to decide on the proper way to say it these days, but I’ve found a clue as to how the name might have been pronounced in colonial North Carolina.

On a 1781 map published in London Magazine, I spotted this: 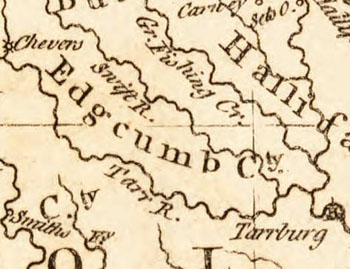 Now surely the British publishers would have known the standard way to spell the name. The county was, after all, named after Baron Edgecombe, a member of Parliament and one time lord of the treasury. So why would they spell it differently, unless this alternate spelling was used to reflect the local pronunciation of the name?