Late in January 1890 the five largest tobacco companies in the United States completed a series of meetings stretching back for almost a year and agreed to combine their operations into the largest tobacco manufacturing corporation in the world. The American Tobacco Company, chartered under the laws of New Jersey, dominated the market for tobacco products in the United States and was a major supplier of tobacco to Europe and Asia for nearly twenty years. A prime example of what historian Alfred D. Chandler, Jr., called “managerial capitalism,” American Tobacco monopolized the production of all tobacco products except cigars, and replaced market forces with management decision making to both stimulate and supply the demand for its product.

The driving force behind the creation of American Tobacco was W. Duke Sons and Company of Durham, North Carolina, led by James Buchanan Duke. The family business had prospered under James B. Duke’s combination of aggressive marketing and strict cost accounting but lagged behind older and larger firms. Duke believed that the future of tobacco manufacturing was in cigarettes and that the key to success in making cigarettes lay in the cigarette rolling machine. In 1885 Duke reached an agreement with the Bonsack Company of Virginia to lease their cigarette manufacturing machines for his factories. Other cigarette manufacturers had rejected the Bonsack machine, fearing that it was unreliable and believing that customers had a strong preference for hand-made cigarettes and would not buy the machine-made variety. Duke’s gamble paid off in a big way. The machines worked effectively and greatly increased W. Duke Sons production. Lower cigarette prices, brought on by increased manufacturing efficiency and secret leasing terms Duke had negotiated with the Bonsack Company, overcame any customer resistance. W. Duke Sons became one of the largest tobacco companies in the United States. In the late 1880s James B. Duke slowly moved toward creating a monopolistic combination of the five dominant tobacco firms. This led ultimately to the series of meetings in 1889 from which American Tobacco was born. 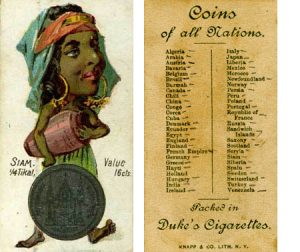 After 1890 Duke methodically combined the manufacturing functions of the firms comprising American Tobacco. He introduced the accounting system which had been so successful at W. Duke Sons and continued a strong marketing and sales program. Under his leadership American Tobacco flourished, gaining control of the market for plug tobacco and pipe tobacco as well as cigarettes. American Tobacco’s success, however, brought it to the attention of Federal regulators, and in 1907 the national government began an anti-trust suit against the company. In 1911 the United States Supreme Court held that American Tobacco violated the Sherman Anti-trust Act and ordered it dissolved. James B. Duke participated in the process of reorganizing the tobacco giant into three companies: a much smaller American Tobacco, Liggett and Myers Tobacco Company, and P. Lorillard Company, but, after that, increasingly distanced himself from the tobacco business and went on to other interests. For a short while, a North Carolina company was at the center of the biggest tobacco manufacturing concern in the world and one of the giants in the era of great American business combinations.