Frustrated by the exponentially growing amount of Blue Ray Discs on the shelves this past holiday season? Having flashbacks of the depressing death of the VHS tape and the emergence of the DVD? Scared your 2002 Honda Civic just doesn’t make the cut compared to your neighbor’s shiny Hybrid-/Electric-/Hydrogen-/food scrap-powered car?!

Then, this postcard is for you! 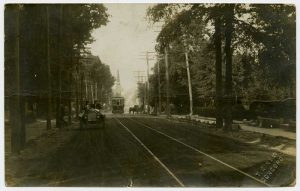 What appears to be an ordinary street scene in Concord, North Carolina (ca. 1911) is actually a fascinating real photo view of many things at “work.” If you look at the center of this postcard, you can see three modes of transportation: two men driving an automobile, a trolley car going down a rail, and a horse-drawn cart. This everyday scene is actually a fascinating signifier of the early twentieth century’s rapid developments in the area of transportation technology—and, like today, the difficulty for people to keep up with the times!

Try looking for the fourth form of transportation (hint: nearby the trees…and no, Concord is not near Kitty Hawk!)

North Carolina will officially welcome its new governor into office this weekend. In honor of this event I thought I would share a few of my favorite pieces of gubernatorial campaign ephemera from 2008. I’ll post about my favorite Democratic ad tomorrow, but one of my favorites from the Republican end of the spectrum is this one: 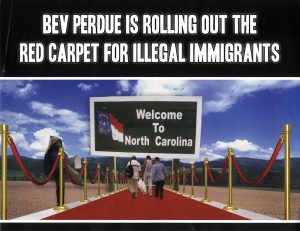 It was created by RGA North Carolina 2008 PAC, a political action committee created by the Republican Governor’s Association. What struck me first about this ad’s image is that it is obviously at least four (and quite possibly five) images blended together to make one composite. You can click on the image to get a closer look. The different levels of focus, varying degrees of pixelation, and strange white marks around components give it away…and having the man on the left “climbing” over the velvet rope did nothing to make it look more authentic. Quality aside, however, the image certainly gets the group’s point across about a hot-button topic.

The saint in question was born in the town of Hamlet, North Carolina, on September 23, 1926, and died on July 17, 1967. Most know him from his work with the tenor sax. However, for the congregation of Saint John Will-I-Am Coltrane African Orthodox Church in San Francisco, John William Coltrane is much more. He is their connection to oneness with the Divine.

The founders of the church are Archbishop Franzo King and Reverend Mother Marina King. Their moment of inspiration came during the mid-1960s at a live concert by Coltrane in San Francisco. Archbishop King, who was raised in the Pentecostal tradition, refers to their experience as a “sound baptism which touched their hearts and minds.” According to the website, “Seeing John Coltrane and hearing his sound that night was that familiar feeling he knew since childhood. It was the presence of God.” Eventually, this “sound baptism” would lead to the founding of Saint John Coltrane Church.

In addition to its ties with the African Orthodox Church, Saint John Coltrane Church embraces the work and experiences of “post-1957” Coltrane, otherwise known as the “Risen Trane.” Archbishop King explains this further on the Mission page of their website:

It should be noted that “post-1957” Coltrane embraced elements of both Western and Eastern religions. For Archbishop King and the congregation, this means that the experience, philosophy, and spiritual legacy of Saint John Coltrane are universal in their ability to “touch the lives of people of many different faiths, creeds, and religions.” With this universality in mind, King recognizes a role for the Christian faith in utilizing the music of Coltrane. In this regard, he writes “in this time and place, we are grateful for the opportunity to lift up the Name of Jesus Christ through Saint John Coltrane’s music.”

So, is Saint John Will-I-Am Coltrane African Orthodox Church just another tourist attraction or a place to actually encounter the Divine? The answer probably differs for each visitor. But whatever the answer may be, the church is more than just a shrine to a jazz musician from Hamlet. It is also a reminder that music can be a phenomenon that both embraces and transcends the personal experiences of the lives it touches.

For further information on the life and music of John W. Coltrane, we invite you to browse UNC Library catalog for materials held in the North Carolina Collection. For further information on Saint John Will-I-Am Coltrane African Orthodox Church, you can visit their website at http://www.coltranechurch.org/index.htm and The New York Times online at http://www.nytimes.com/2007/12/01/us/01religion.html.