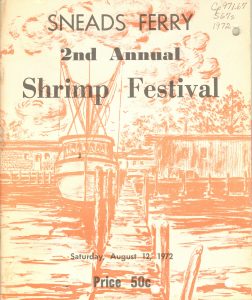 Shrimp have long been a part of life in the Onslow County town of Sneads Ferry. Since 1971 the town has celebrated its ties to the crustacean with the Sneads Ferry Shrimping Festival, held the second weekend of August. But, as in coastal communities throughout the U.S., fishing is hardly the economic backbone it once was. Residents who once depended on the sea for their living now must commute to other towns for work. And those who still haul in catches find themselves competing at the market with farm-raised seafood. Homes held by families for generations are being sold as developers move in to capitalize on a demand for beach homes.

Husband and wife team Matt and Cornelia Barr spent seven years documenting the changes brought to Sneads Ferry. Their film Wild Caught: The Life and Struggles of an American Fishing Town airs tonight at 10 on UNC-TV. The documentary has been updated since its original release in 2006.