“[Secretary of Commerce Herbert] Hoover’s Bureau of Census has  issued the cradle and grave statistics for 1922.

“The birthrate drops, especially in the professional classes of native American stock….  The highest rate was 30.2 − in North Carolina; the lowest was 18 − in the State of Washington.”

The following is from a news release by Colonial Williamsburg:

“The Colonial Williamsburg Foundation has acquired a large collection of colonial paper currency issued by North Carolina prior to the American Revolution.

“Named the ‘Cornell Hoard,’ the money was collected originally by Samuel Cornell, a transplanted New Yorker who became a wealthy merchant after moving as a young man to New Bern, N.C. in the mid-1750s. In addition to his activities as a merchant, Cornell also was involved in high risk currency speculation as evidenced by the hoard of colonial currency.”

Read more about this collection of NC currency at: http://www.history.org/foundation/press_release/displayPressRelease.cfm?pressReleaseId=1592

Greetings from the Technical Services Department in the North Carolina Collection Photographic Archives (NCCPA)! We are very pleased to announce the launch of a new feature now available with finding aids for selected collections in the NCCPA. This feature has been specifically designed to provide researchers access to NCCPA materials that have been digitized in recent months and years. The ordering processes remain the same and researchers interested in requesting reproductions for use should contact the North Carolina Collection Reference staff at wilsonlibrary@unc.edu.

Upon arrival at any one of the finding aids for collections with this feature, a box will appear at the top of the page indicating that the collection has digital materials available. The link in the box opens the Digital NCCPA ContentDM site in another window. This site is not a “typical” digital collection with an introduction and detailed information about the creator and collection; rather it is designed to display digital material available at that time associated with the collection. Researchers should consult finding aids for more detailed information about these collections.

The descriptions provided with the digital images come straight from the finding aid and in some cases may be minimal; this is done intentionally, with the concentration being on providing users with access to images. Researchers are reminded that these digital images represent only the “smallest drop in a large ocean” of photographs in the NCCPA and are encouraged to use the finding aids to access collections to find multitudes of images that have not been digitized. Additional materials will be made available as they are requested and copyright allows. 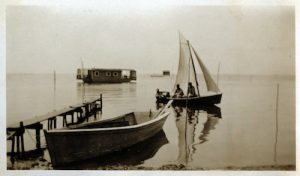 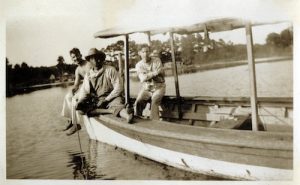 Visitors to UNC’s pre-game festivities on Oct. 30 can catch a special glimpse of Tar Heel football history. A showing of archival film clips in Wilson Library will feature highlights from games past, including footage of football legends such as Charlie “Choo Choo” Justice and “Famous Amos” Lawrence. In addition, Woody Durham, the “Voice of the Tar Heels,” provides narration to the clips.

“Gridiron Glory” will run in a twenty-minute continuous loop in the Pleasants Family Assembly Room during the University’s Tar Heel Town. Showings will begin at 12:30 and will continue until 3:30. The showings are free and open to the public.

Find out more about the event at this link: http://blogs.lib.unc.edu/news/index.php/2010/09/football-films/

N.C. Miscellany’s Washington correspondent (a Tar Heel who, by circumstance, is forced to live in exile) shares this bit of news with us: William Richardson Davie’s sword has returned to Salisbury. The city bestowed the ceremonial weapon upon Davie in 1780. Davie, you may recall, interrupted his law studies in Salisbury to lead a local cavalry troop in the Revolutionary War. He’s credited with a few other notable achievements, too. How many can you name before you check out the link above?

“The rifle became so popular in the South that a factory for making the hunting rifle was established at Charlotte, N. C., about 1740. The founders came from Leman’s Rifle Factory at Lancaster, Pa….

” ‘General Washington’s favorite weapon was the rifle,’ says George W. Park Custer, in a…   memorandum printed… for private distribution…. ‘His was presented to him in 1787 [and] was made in Charlotte, N. C. It is four feet in length of the barrel, and the entire piece is handsomely mounted with silver. The lock is beautiful work. I have known the General to kill a deer at 150 yards with this rifle.’

“This same Charlotte rifle-making firm in 1777 presented General Washington with the finest and undoubtedly the first pair of rifle pistols ever made in America. They had twelve inch barrels carrying four ounce balls and would shoot with the accuracy of a rifle at fifty or sixty feet. They saved the General’s life at Germantown [in October 1777] but that story, though a most interesting one, does not belong here.”

A colorful and intriguing account indeed, but I’ve been unable to turn up any supporting evidence on Washington’s weaponry (or on George W. Park Custer).

This caution flag is from an online bio of Henry E. Leman (1812- ), a gunsmith in Lancaster County, Pa.:

“Claims have been made on a number of occasions that gunsmiths named Leman worked in Lancaster County in the eighteenth century…. The records of the Lancaster County Court House do not support the hypothesis of Leman production before the time of Henry E. Leman.”

“After [Nina Simone’s 1961 concert at Memorial Hall, UNC Chapel Hill student] Frank Craighill arranged for dinner at one of the area’s newest steak houses, the Angus Barn. Craighill [president of the social club that sponsored the concert] had picked the restaurant with care… and when Nina and the trio walked in as guests of the university, a big round table was already set and waiting for them. It was easily one of the most elegant meals any of them had eaten on the road….

“[But] an encounter later at the train station in Raleigh left no doubt they were in the South. As they waited for the train to New York, a white woman claimed she had lost her purse. The station manager found the purse in the men’s restroom. One of the waiting passengers asserted that [drummer Bobby Hamilton] had been the last person to use it, and in a flash police… zeroed in, all but accusing him of theft. But Nina leapt to his defense. ‘She just went crazy,’ [bassist Chris White] remembered. ‘She read them the riot act…. She was just as black as she could be with these guys and they left us alone.’ ”

— From “Princess Noire: The Tumultuous Reign of Nina Simone” by Nadine Cohodas (2010)

A footnote: Frank Craighill went on to become a pioneer in the field of sports marketing.

A longtime NC Collection researcher recently pointed out the following sentence from Chancellor Bill Aycock’s report to the UNC System President for 1957/1958:

“Lieutenant Dean Smith, currently serving in the Air Force, has been employed to succeed Mr. James A. Freeman as Assistant Basketball Coach.”

And so it began…