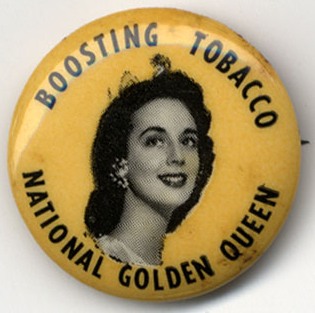 “A major promotion during 1956 was the National Golden Queen Festival, presided over by Queen Shirley Bagwell. Many beauties from the four major tobacco raising states entered the Queen’s contest, and Governor [Orval] Faubus of Arkansas was a key speaker….”

Whatever happened to the National Golden Queen Festival?

And to Shirley Bagwell? She was also a semifinalist in the 1956 Miss USA pageant, but lacking a photo I can’t say for sure this is her royal depiction on the pinback button. Is there a Golden Queen expert in the house?