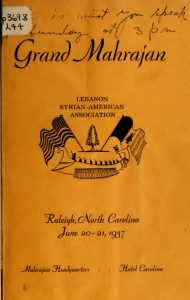 It’s a festival. This two day gathering of Carolinians of Lebanese ancestry included dancing, food, musical performances, speeches (many of them glorifying their new homeland) and even a mock sword duel. For many mahrajan attendees, the event was a way to stay connected to the culture they had left behind when they immigrated to North and South Carolina at the turn of the 20th century. From early days as peddlers, the Lebanese moved on to become proprietors of dry goods stores, clothing stores, and restaurants in such towns as Wilmington, Goldsboro, New Bern and Salisbury. And over time, these immigrants became woven into the fabric of North Carolina, filling seats in local and state government, running major businesses and contributing to such professions as medicine, dentistry, and law. In more recent times, immigrants have continued to arrive from Lebanon, escaping the hardship created by that country’s 15-year civil war and its aftermath.

North Carolina State University historian Akram Khater is leading a multi-year effort to document both the old and new arrivals from Lebanon. He’ll be interviewing Tar Heels of Lebanese descent; gathering their photos, letters and other mementos; building a digital library of these items; and producing a documentary film. Right now he’s seeking contributions and people to interview.

Full disclosure, as an undergraduate at UNC I interviewed some of the early Lebanese settlers and their descendants for a paper. That paper and the mahrajan program are in our collection (Thanks to a cooperative effort involving the University Library and the Internet Archive, you can actually leaf through the entire program).