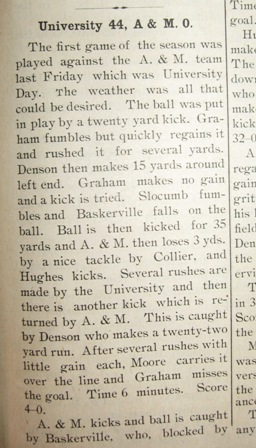 Tomorrow will mark the 100th meeting between the Tar Heels and Wolfpack football teams. UNC won the first game, which was played on October 12, 1894, by a score of 44-0 (see image from the Tar Heel above). The Heels went on to win or tie the following 12 games, finally losing to the Pack for the first time in 1920.

“Leonidas L.  Polk, president of the Southern Alliance and a former Confederate colonel, best expressed the white Alliance leadership’s perspective regarding…  the proposed cotton pickers’ strike. Not for one moment, he declared through his paper the Progressive Farmer, did he ‘hesitate to advise our farmers to leave their cotton in the field rather than pay more than 50 cents per hundred [pounds] to have it picked.’ Polk went on to accuse the organizers of the strike of trying ‘to better their condition at the expense of their white brethren’…

“[Polk’s] double standard reveals just how divorced white landowners were from — indeed in direct opposition to — the mostly landless African Americans who comprised the base of Black Populism.”

Polk’s house, restored circa 1890 and most recently resituated to Blount Street in Raleigh, opened to the public this week.