With the 88th Academy Awards happening this month, we’ve been dreaming of old-school starlets. Our February Artifacts of the Month are a trio of tobacco cards from the early 1900s featuring actresses from that era. 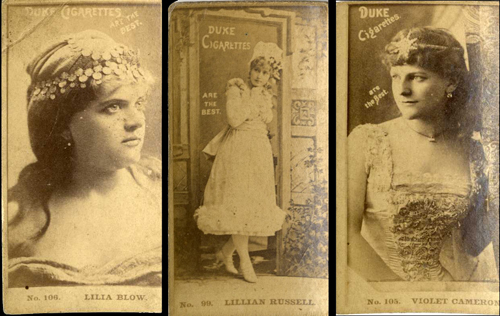 Tobacco cards were first included in cigarette packs in the 1870s, with the purpose of stiffening each pack to lessen the chance that it would be crushed or bent. It wasn’t long before some enterprising soul saw their potential for brand promotion and a new advertising medium was born.

By the mid-1880s, manufacturers were printing themed sets of tobacco cards, with each card in the set bearing a unique image. The idea was to encourage brand loyalty by creating consumers’ desire to complete a set — so the themes capitalized on the popularity of certain cultural interests. Baseball players, boxers, and aviators all appeared on tobacco cards. And so, of course, did beautiful young actresses.

The three cards featured here are just a few in a huge series. Lillian Russell was one of the most famous American actresses at the turn of the twentieth century. Violet Cameron was a British stage actress with a scandalous personal life. And the lovely Lilia Blow remains a mystery to this writer. Students of cinematic or dramaturgical history, please chime in in the comments!