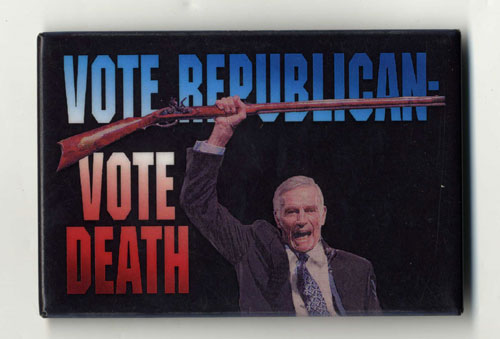 “Charlton Heston told more than 5,000 National Rifle Association members [at their convention in Charlotte] that he wants to serve an unprecedented third term as their president to complete a mission: ensuring Al Gore’s defeat in November…

“As Heston concluded his speech, he was handed a vintage musket, then gave an encore of his performance at his first NRA convention in 1990 in St. Louis, when he intoned the Second Amendment.

“‘So as we set out this year to defeat the divisive forces that would take our freedom away, I want to say those words again for everyone within the sound of my voice to hear and to heed, and especially for you, Mr. Gore.’

“Lifting the musket over his head, Heston grumbled: ‘From my cold dead hands!'”