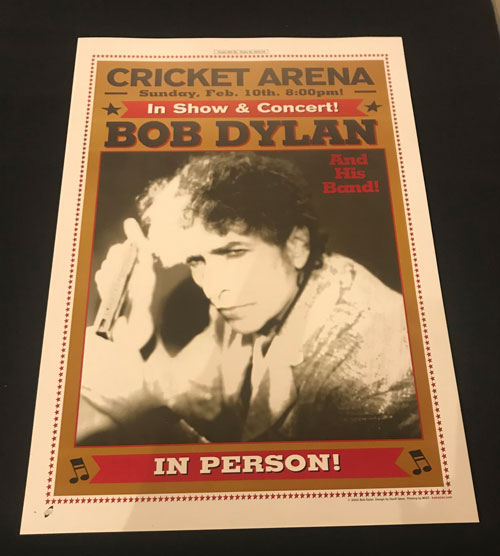 Excuse our immodesty, but surely Bob Dylan’s appearances over the years in North Carolina Miscellany played a small part in bringing him to the attention of the Swedish Academy:

— On his performance in Charlotte during Watergate

— On his debt to Thomas Wolfe

— On his visits to Carl Sandburg and from Bland Simpson

If only he could’ve waited for Love Valley before going electric….

“Sara Dylan answered the door, gave me a blank look, and closed the door. About two minutes later Bob Dylan himself appeared and stepped out onto the small porched entry. He wore blue jeans, a white shirt buttoned all the way up and a black leather vest, and he was very friendly and relaxed.

— From “Christmas With Dylan: A true-life pilgrimage” by Bland Simpson in Creative Loafing (Dec. 15, 2004)

I don’t know which I appreciate more about “Christmas With Dylan” — its unforgettable, out-of-left-field last line or its serendipitous parallel with Dylan’s own youthful pilgrimage:

“On the porch was Mrs. Lillian Sandburg. She didn’t seem startled. …. Dylan announced: ‘I am a poet. My name is Robert Dylan, and I would like to see Mr. Sandburg.’ She disappeared into the house….Finally, the poet appeared, a genial, slow-moving man …. He wore an old plaid wool shirt, baggy trousers and a green eye-shade over shell-rimmed glasses….Sandburg: ‘You look like you are ready for anything….’ ”

— From “No Direction Home: The Life And Music Of Bob Dylan” by Robert Shelton (2011)

“Given [Jonah] Lehrer’s offenses, it is interesting that among the trickery in ‘Chronicles’ [Bob Dylan’s 2004 memoir] are misattributions. In one section…  Mr. Dylan appeared to take a phrase from the letters of Thomas Wolfe and put it in the mouth of U2’s Bono.”

— From “Freewheelin’: Bob Dylan, Jonah Lehrer and the Truth,” an op-ed piece by David Kinney in the New York Times (August 2)

What follows is cut-and-pasted from the wildly obsessive Dylan fan site  swarmuth.blogspot.com:

Dylan takes on the voice of Wolfe himself when describing his frame of mind and his interactions with producer Daniel Lanois while recording the album “Oh Mercy” in New Orleans. Here are a few examples.

There had been a clashing of spirits at times, but nothing that had turned into a bitter or complicated struggle.

You say nothing of the bitter and complicated struggle which has been going on between two people for two years.

I try to use my material in the most effective way. The songs were written to the glory of man and not to his defeat, but all of these songs added together doesn’t even come close to my whole vision of life. Sometimes the things that you liked the best and that have meant the most to you are the things that meant nothing at all to you when you first heard or saw them. Some of these songs fit into that category. I suppose all these things are simple, matter of fact enough.

On the record, I had to make spur of the moment decisions which might not have had anything to do with the real situation.

You mention the fact that I have worked hard in an effort to learn how to use my material in the most effective way.

…that the story has been written to the glory of man and not to his defeat.

That is that I should like my work to be of one piece with all my life, and that to me the labor of writing does seem to be united to a man’s whole vision of life…

To me it is and always has been the most difficult kind of reading, just as it is the most difficult of writing, and the poems that I have liked the best and that have meant the most to me are those that meant nothing at all to me when I first read them.

All these things I suppose are simple and matter-of-fact enough, but all the strangeness and mystery of time and chance and of the human destiny is in them for me and they seem wonderful.

What you did not say in your story, however, and what you know to be true, is that the Guggenheim fellowship and this sudden spur-of-the-moment decision had nothing to do with the real situation.

That being said, I had wholehearted admiration for what Lanois did. A lot of it was unique and permanent. Danny and I would see each other again in ten years and we’d work together once more in a rootin’ tootin’ way.

…I’d like to say to you that he has the most genuine and whole-hearted admiration for your genius and power as a novelist – he feels, as I do, that your talent is unique and permanent, that there is no one like you, and that if they read any of our books in the future they will have to take account of you.

Much of Chronicles: Volume One is constructed in this rootin’, tootin’ manner, from dozens of different sources. In this particular stretch Dylan appears to be warmly letting you in, but he’s not doing that at all. It’s a freeze-out. He’s hiding behind a wall of Wolfe.