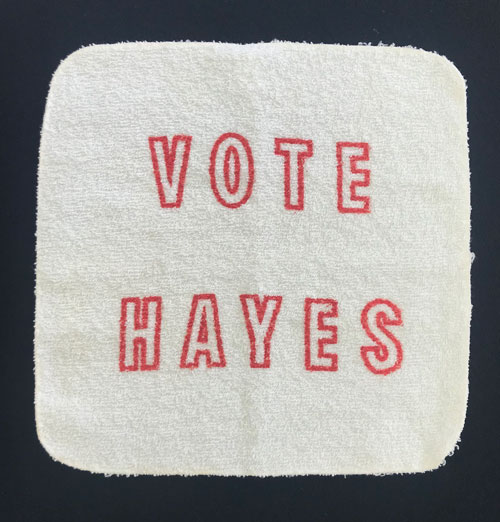 Did this distinctive if humble item spring from Robin Hayes’s campaign for Concord City Council? For N.C. House? For Congress? For governor?

Regardless, the Cannon Mills scion’s hortatory washcloth bears a Cannon Mills label (84 percent cotton, 16 percent polyester) — and even found its way to a booth at the mammoth antique mall now occupying the former Cannon-owned Gibson Mill in Concord. 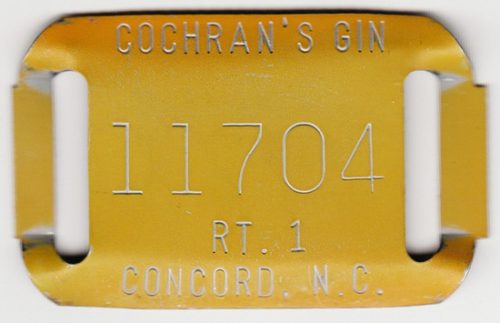 After cotton was picked and baled, it was stored at the local gin and tagged with an identifying number linking it to the farmer who owned it. Cotton is highly flammable, so the metal tags were especially important in the event of fire. These “fire tags” had mostly given way to other means of identification by the end of the 20th century.

“In 1926, the United Daughters of the Confederacy erected a monument to the Ku Klux Klan in a town [Concord] just outside Charlotte, North Carolina. Though the marker itself seems to have been lost to time—or more precisely, to the urbanization and shrubbery that has sprouted around it—proof of its existence endures thanks to the UDC’s own meticulous record-keeping. In 1941, a local division of the group published North Carolina’s Confederate Monuments and Memorials, a book that handily compiles various tributes to the Confederacy from around the state, many of them the UDC’s own handiwork. Writer James Huffman got his hands on a first pressing, in which he noted the monument’s inscription:

“ ‘In commemoration of the “Ku Klux Klan” during the Reconstruction period following the “War Between the States,” this marker is placed on their assembly ground. Erected by the Dodson-Ramseur chapter of the United Daughters of the Confederacy. 1926.’ ”

— From “Time to expose the women still celebrating the Confederacy” by Kali Holloway in the Daily Beast (Nov. 2) 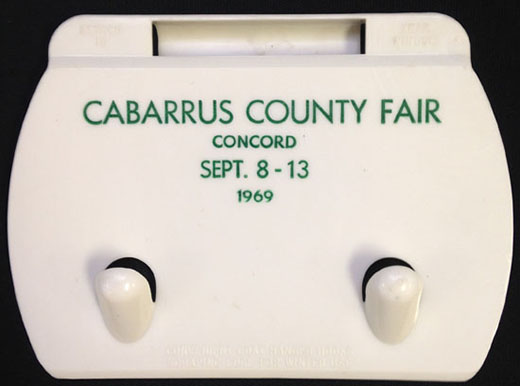 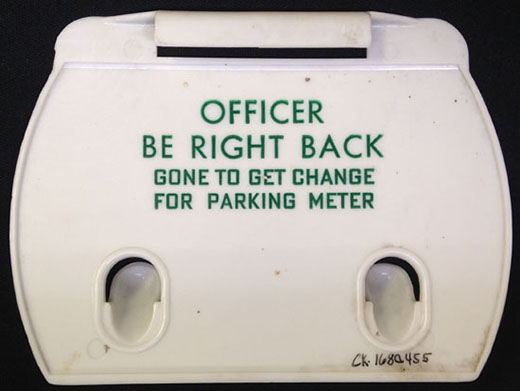 This odd plastic relic of the age of coin-op parking meters just makes me smile. Designed to slip over the top of a driver’s side window, it not only promotes the Cabarrus fair, but also serves to dodge a parking ticket and (I’m guessing here) to provide a couple of handy coathooks.

Wonder how “gone to get change” went over with the local constabulary….

On this day in 1876: The United States celebrates its centennial with a grand exposition in Philadelphia, but some Southerners have yet to reconcile with the Union. As passengers at the Concord depot wait for a train to Philadelphia, diehard Confederates assault them with rocks. 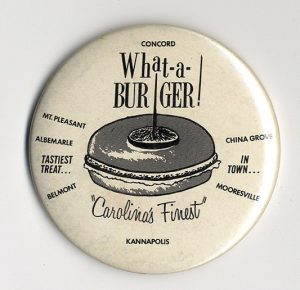 No date on this 3-inch pinback button, but the typography and the vaguely Space Age rendering of a pickle-topped hamburger suggest 1960 or so. (Is that cheese or lettuce squashed beneath the patty? Regardless, doesn’t it belong  on top?)

“[In 1965]  ‘A Patch of Blue’ inflamed some Southerners…. Authorities discovered a homemade bomb with five sticks of dynamite planted in a Concord, North Carolina, theater. Luckily, the bomb malfunctioned….

“[Two years later] in Lexington, North Carolina, 20 Ku Klux Klan members picketed a drive-in theater [showing ‘Guess Who’s Coming to Dinner’], carrying signs that read ‘Fight for your Rights’ and ‘Mom and Dad — It Could Happen to You.’ ”