“In spring 1942 — shortly after the United States entered World War II — the State Department leased the Grove Park Inn as an internment camp for Axis diplomats, family members and servants.

“ ‘All of this is strictly in accordance with international law,’ the [Asheville Citizen reported]. ‘While the Italians, Bulgarians and Rumanians are here they will be isolated from the community and protected from the curious.’

“Subsequent information arrived only after the 221 prisoners (the first official number provided to residents) departed [on May 6] for their homelands in exchange for U.S. diplomats held abroad.

“According to the Citizen, the foreign diplomats had paid for their stay at the Grove Park Inn. ‘Shuffleboard, lawn bowling, badminton, and bridge were reported to have been the chief amusement’ during their confinement.”

“In mid-1955, the Supreme Court set about identifying its own relocation facility [in the event of nuclear war] and sent clerk Harold Willey to hunt for a spot. Willey surveyed several properties in North Carolina and reported back that ‘Because all large cities are considered to be prospective enemy targets, a hotel in a secluded small city, wherein approximately one hundred people could both live and work, with spaces available for a court room and clerical offices, seems a most appropriate facility for the Court.’ Making the case for the 141-room Grove Park Inn, Willey added that ‘A golf course adjoins the Inn and the new owners … plan to build a swimming pool.’

“A brief contract was inked on April 3, 1956… and the Cold War history sleuths at CONELRAD dug up Grove Park’s copy in a hotel filing cabinet in 2013. Lacking a sunset clause, it remains legally binding to this day. Let’s hope it will never be invoked. ”

— From “The U.S. Supreme Court’s secret Cold War relocation facility in the mountains of North Carolina” in Atlas Obscura

“Asheville was slow to take up the great game of golf. The Asheville Country Club at the foot of Sunset Mountain [had] a nine-hole golf course, but the standard course had become 18 holes. The Southern Railway, in bringing people to Asheville, found resistance on account of the lack of a good golf course….

“S.H. Hardwick of the Southern Railway came to Asheville under auspices of the Chamber of Commerce and in an open meeting put the matter up to the citizens. As a result, a complete change occurred. Instead of one being regarded as a freak if he played golf, or wore knickers or subscribed to stock in the Asheville Country Club, he became a patriot. It was a popular thing to do. If that was what Asheville needed to keep its spring business, it helped greatly until the summer crowds started toward the mountains. The Asheville club expanded to the full 18 holes.

“One afternoon I accompanied E.W. Grove, to the top of Sunset Mountain to a point on the eastern end of the ridge. Mr. Grove designated this  spot for his new hotel [the Grove Park Inn, which would open July 1, 1913]…. Later I learned his St. Louis bankers vetoed the site because they feared that the hotel would not succeed unless it was at the foot of the mountain facing the new golf course and had a patronage spread uniformly over the year….”

— From “Jeffress, Former Newspaperman Here, Describes Asheville of 1908-1911” by Edwin Bedford Jeffress in the Asheville Citizen (March 26, 1950) [excerpted in “Golf takes full swing in Asheville” by Thomas Calder in the Mountain Xpress (Nov. 8)]

On this day in 1930: After a month’s rest at the Grove Park Inn in Asheville fails to halt his mental and physical deterioration, William Howard Taft submits his resignation as chief justice of the United States.

Taft, who earlier served as president, is 73 years old, weighs 300 pounds and suffers from progressive heart disease. After sending his resignation ahead, he returns by train to Washington, where he will die barely a month later.

“P.S. There is a poor, desperate, unhappy man staying at the Grove Park Inn. He is a man of great talent but he is throwing it away on drink and worry over his misfortunes. [Maxwell] Perkins thought if Mama went to see him and talked to him, it might do some good — to tell him that at the age of forty he is at his prime and has nothing to worry about if he will just take hold again and begin to work.

“His name, I forgot to say, is Scott Fitzgerald, and a New York paper has just published a miserable interview with him — it was a lousy trick, a rotten…piece of journalism, going to see a man in that condition, gaining his confidence, and then betraying him. I myself have suffered at the hands of these rats, and I know what they can do. But I don’t know whether it’s a good idea for Mama to see him — in his condition, he might resent it and think we were sorry for him, etc .— so better wait until I write again.”

On Fitzgerald’s 40th birthday two weeks earlier, a reporter from the New York Post had tracked down the drunken author in Asheville and brutally described him under the headline “On the other side of paradise… engulfed in despair.”

“Positively no dogs of any size, value, color or ugliness allowed….Guests who attempt to smuggle them in in vanity boxes or suit cases will be asked to vacate their rooms.”

— From a 1920 brochure for the Grove Park Inn in Asheville

The celebrity nature-seekers, who camped in tents by the mountain roads, were delayed along the way by crowds of admirers. In Weaverville, Edison declined calls for a speech but answered the Asheville Citizen’s request for a comment on the world war: “Man’s foolishness. That’s all you can make out of it. Man is a fool.” 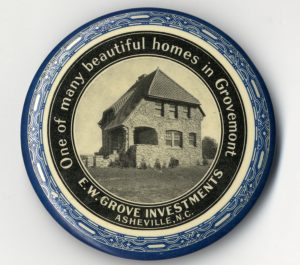 Though the most celebrated, the Grove Park Inn wasn’t the final project of quinine magnate E. W. Grove.  In Swannanoa he created Grovement, a planned community ‘where people of moderate means can secure large lots at reasonable prices.’ ”

According to this oral history, Grove envisioned “a neighborhood as close to his grandparents’ town in England as he could recreate.”

In “Asheville: A History” (2007) Nan K. Chase refers to Grovemont as “unsuccessful,” apparently another victim of the city’s extreme vulnerability to the Crash of ’29.

Pictured: a celluloid advertising mirror from the collection. I wonder if this stone house still stands — sure looks built to last, doesn’t it?