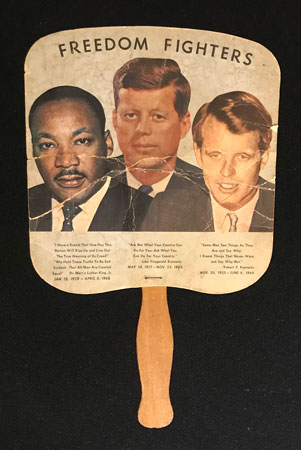 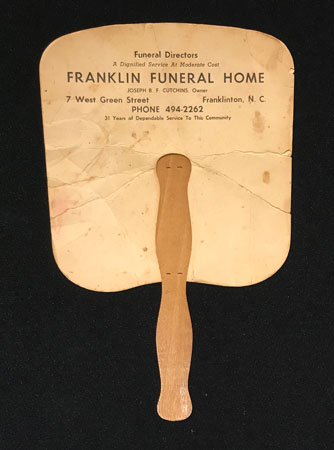 The Kennedys and Martin Luther King have long been an iconographic trio, not only visually but also musically (with Lincoln). Sometimes Dr. King had the fan all to himself.

“The more violent forms of hate-peddling [during the 1960 presidential campaign] have come in for attack by major Southern papers [such as] the Greensboro, N.C. News: ‘Organized efforts on the part of respectable Protestant churches to inject venomous, and in many cases false, prejudice into the presidential campaign are in themselves violative of the American tradition of separation of church and state’….  Said the Raleigh News & Observer: ‘Certainly to hold John Kennedy responsible for the Spanish Inquisition is to say the least a little ex post facto.’

“Most papers try not to cover the subject until it hits them in the face. Jonathan Daniels of the  News & Observer states the case baldly: ‘We wouldn’t dream of going out and trying to stir up more debate.’

“The section that causes most concern to Southern editors is the often-neglected letters-to-the-editor column…. The Charlotte Observer… declines to run letters ‘in which members of one faith attempt to recite what members of another faith believe…. We are not prepared, for one thing, to check the authenticity of statements attributed to Catholic authors or clerics. We want to know what our letter writers think, not what our letter writers believe someone else thinks.’ “