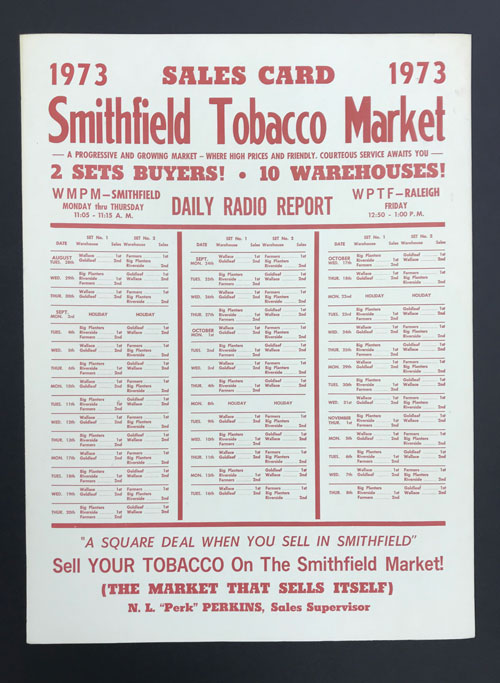 By 1973 the Surgeon General’s report had sent North Carolina’s tobacco industry into steady decline, but you couldn’t tell it from this enthusiastic schedule poster for “the market that sells itself.”

WMPM’s call letters once stood for World’s Most Progressive Market.

“[There are] countless small shrines in the hometowns or the adopted towns of native sons and daughters who went away to become famous, though some of the stars are barely remembered today. These museums are mostly special for their focus and usually reflect an undying care for their subjects by true keepers of the faith….

“In 1996, the little town of Smithfield, N.C., bought the extensive collection of Ava Gardner memorabilia from a childhood acquaintance of the actress, who lived for about 10 years of her childhood in the rural eastern North Carolina town. A movie siren of the 1940s and 1950s who was married for several tumultuous years to Frank Sinatra, Gardner died in 1990.

“ ‘There is no question that part of having the museum is economic development, bringing people to our town, at least for a little while,’ said Todd Johnson, the museum’s executive director. ‘But movie channels like Turner Classics now give another generation a sense of who Ava was, so I think people enjoy having a museum to see her things.’ ”

Most recently the Gardner Museum has installed a “Hemingway’s Heroine” exhibit, showcasing her roles in three movies based on Ernest Hemingway’s fiction.

I do wish the museum had been able to assemble its souvenir hand fans without stapling Ava’s classic countenance.

— Unlike similar small-town shrines to Jimmy Stewart and Clark Gable, the Ava Gardner Museum is achieving at least modest success — thanks to Frank?

— Confederate money had its day.

Among the disappointed underbidders at the recent Debbie Reynolds memorabilia  auction was the Ava Gardner Museum in Smithfield.

According to Donna Bailey-Taylor, acting director, the nurse’s uniform Gardner wore in “The Sun Also Rises” fetched $2,500 (plus premium), $1,000 past the museum’s limit.

The museum had already returned to the Reynolds collection several items on loan from “Show Boat” and “Mogambo.” “Our appeal to Debbie was that we would care for and showcase these two iconic movies’ artifacts for visitors to enjoy,” Bailey-Taylor says, “but alas she was not inclined to donate or sell to us privately.”

A second Reynolds auction is scheduled for December, and the museum hopes to bid again. Want to pitch in? Contact avainfo@avagardner.org.

“We have measured some of her costumes at the museum, and we can verify that
her waist was 19 inches in her costume from ‘The Great Sinner’ [made in 1949, when she was 26]…. It’s a stunning black velvet dress with whalebone corset sewn in — I’m not sure how she sat down in it.  It must have been very uncomfortable.”

“Henry McNeal Turner, chaplain of a black regiment, described a scene in May 1865, as African American troops marched with the victorious Union armies through North Carolina. Leaving Raleigh, Turner’s regiment reached the town of Smithfield, where they encountered a burned bridge and no other way to cross a river than to remove their clothes and wade, ‘chin deep,’ to the other side.

” ‘I was much amused to see the secesh women,’ observed Turner, ‘watching with the utmost intensity, thousands of our soldiers, in a state of nudity. I suppose they desired to see whether these audacious Yankees were really men, made like other men….’

“As Southern women ‘thronged the windows, porticos and yards, in the finest attire imaginable,’ Turner’s ‘brave boys would disrobe themselves, hang their garments upon their bayonets and through the water they would come, walk up the street, and seem to say to the feminine gazers, ‘Yes, though naked, we are your masters.’

“In this scene, charged with sexual and political symbolism, Turner captured a memory that haunted the white South for generations to come….”