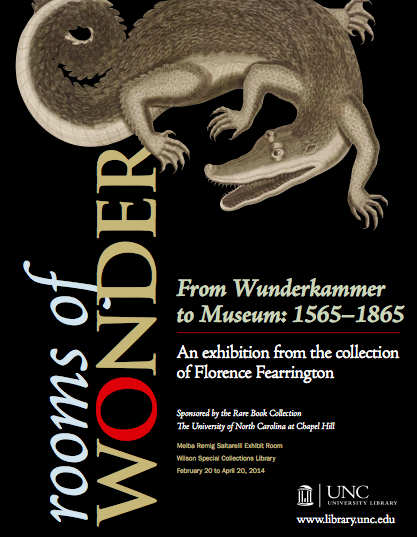 A record-breaking number of people arrived at Wilson Library last night to view Rooms of Wonder: From Wunderkammer to Museum, 1565-1865 , an exhibition from the collection of alumna Florence Fearrington (A.B. 1958). The extraordinary assemblage of books, prints, and objects captivated an audience of over 200 students, faculty, and friends, who came from near and far. Exhibition goers had the opportunity to examine a range of important items that document the cabinets of curiosities phenomenon, from the first book to illustrate a specimen cabinet (1565) to a P. T. Barnum show bill advertising living wonders (1863).

Also on display were objects from the North Carolina Collection Gallery’s natural history holdings and the Rare Book Collection’s own Curiosities Cabinet (mostly non-codex examples from the history of the book), all of which recall the contents of Wunderkammers past and greatly enhanced the exhibition experience.

After the viewing and reception, people headed down to the Pleasants Family Assembly Room to hear a lecture entitled “The Cabinet of Curiosities in Word and Image: 500 Years of Representation (and Misrepresentation),” delivered by the leading scholar on Wunderkammers and the origins of museums, Arthur MacGregor, former curator of antiquities at Oxford University’s Ashmolean Museum.

The overflowing crowd was also accommodated in a room on the other side of Wilson’s lobby, where a live audio-video stream enabled those seated there to follow the speaker’s every word and projected image.

MacGregor gave a sweeping survey of cabinets of curiosities, analyzing the degree to which many of the arresting renderings of Wunderkammers matched—or failed to match—their textual descriptions. It was an expert exploration of the topic, and appreciated by all in attendance. UNC is grateful to Mr. MacGregor, and, of course, to Ms. Fearrington for such a special evening.

The show will be up for the next two months, and we suspect that we’ll see many of you in the Saltarelli Exhibit Room again and again, as this is an exhibition that repays revisiting. Also, mark your calendars for a future Rooms of Wonder lecture on Saturday, April 5, by Prof. Pamela Smith of Columbia University.

It takes a lot of hard work to make an exhibition happen. There are labels and graphics, and, of course, the mounting of the actual items. The Rare Book Collection is lucky to have great colleagues in the Wilson Library Conservation Lab. They’ve been busy fabricating cradles to display safely the marvelous books lent by alumna Florence Fearrington for Rooms of Wonder: From Wunderkammer to Museum, 1565-1865. The  show opens next week on Thursday February 20 at 5 p.m., with a viewing in the Melba Remig Saltarelli Exhibit Room, followed by a lecture from the leading authority on cabinets of curiosities, former Ashmolean Museum curator Arthur MacGregor. It should be a great evening, and we look forward to seeing you!

The world mourns the loss of Nelson Mandela, who passed away on December 5 at the age of 95. We pay special tribute to him here by examining a unique object in the Rare Book Collection: a beadwork Zulu love letter from South Africa.

In 1937, Daniel M. Malcolm, Chief Inspector of Native Education in Natal, South Africa, brought the letter to UNC-Chapel Hill as a visual aid for a lecture he gave at that year’s “Conference on Education of American Negroes and African Natives.” Malcolm explained that the letter was written by a girl to her beloved. The white beads indicate the purity of her heart, and the red beads show that her heart is broken and bleeding for her beloved. The four black squares represent four questions about their relationship that he must answer. Malcolm gave the love letter to UNC and its Hanes Foundation for the Study of the Origin and Development of the Book. It subsequently became part of the RBC’s “Curiosities Cabinet,” which houses many other non-codex objects of significance for the history of the book, such as cuneiform tablets and papyrus fragments.

Dr. Malcolm’s visit to Carolina was before the implementation of apartheid segregation in South Africa in 1948, although black South Africans had been severely restricted by the 1913 Natives Land Act, which reserved the majority of the country’s land for whites. In fact, Nelson Mandela had studied at South Africa’s prestigious University of Witwatersrand in the 1940s, after attending Fort Hare University, the South African Native College. Witwatersrand, along with the University of Cape Town, followed a policy of academic non-segregation, which began because of inadequate training facilities for black natives to study medicine. The University of Witwatersrand remained an “open” university until 1959, when the government passed the Extension of University Education Act, also known as the Separate Universities Act. Witwatersrand, although “open” until then, was not a particularly hospitable environment for blacks, as the research of B.K. Murray indicates. Mandela failed to gain his law degree, going on to become Witwatersrand’s “most famous non-graduate.”

The first African-American students at Carolina arrived in 1951, four law students and one medical student, because there were no equal facilities for them in the state, according to a federal court ruling. In 1954, the Supreme Court abolished segregated public schools, and Carolina admitted its first undergraduate black men the next year. Fifty years ago, in 1963, Karen Parker became UNC-Chapel Hill’s first African-American female undergraduate. And the following year, the Civil Rights Act ended public segregation in Chapel Hill and the United States. In South Africa, Nelson Mandela was tried for sabotage in 1963 and sentenced to life imprisonment in 1964. International pressure led to his release in 1990, and in 1994 he became the first black president of a democratic South Africa.

The Zulu beadwork letter is a tangible artifact of the parallel and divergent histories of segregation and education in South Africa and North Carolina. In the 2004 motion picture Zulu Love Letter, an adolescent girl makes a letter for her mother, who is haunted by the horrors of her past under apartheid. Its images of solitude, loss, hope, and love are intended to encourage the mother not to give up the fight. In the wake of Nelson Mandela’s death, we turn to our own Zulu love letter and remember a great man, a man who did not give up the fight.

Book-loving sports fans were pleasantly surprised last night watching the UNC-Miami football game on the ESPN network. Although Chapel Hill was not victorious in the competition, its Rare Book Collection scored big, with a break segment featuring footage of the curator and a splendid folio in Wilson Library’s Grand Reading Room.

The book in question was the first volume of four constituting Albertus Seba’s Locupletissimi Rerum Naturalium Thesauri Accurata Descriptio, et Iconibus Artificiosissimis Expressio (Amsterdam, 1734-1765). A marvelous compendium illustrating the Dutch pharmacist’s collection of natural history specimens, it includes this print of a crocodile, which was used as the signature image of the Grolier Club exhibition Rooms of Wonder. We blogged about the exhibition in January, and now we’re delighted to announce that a version of it will be coming to Chapel Hill in February 2014, courtesy of collector/alumna Florence Fearrington.

The RBC copy of Seba had been out for an instructional session with Prof. Beth Grabowski’s printmaking students, who were seeking inspiration to execute linocuts for a bestiary. Just after that class, an ESPN cameraman–on campus for the big game–visited Wilson, eager to film. Although the videographer now works in sports, he told us he began his career in public broadcasting and was fond of shooting ” historical” segments to air during breaks and half-time. He had firm fantasies about a librarian pushing a book truck and turning pages of a rare tome. We were able to accommodate.

So you weren’t hallucinating while tuned in to the tube last night. Books and beasts in the middle of a sporting event, it was real, if also somewhat surreal.

Wilson Library’s Grand Reading Room is truly its own Room of Wonder.

On January 9th, enthusiastic Chapel Hill alumni and friends met  at the Grolier Club in New York City to enjoy the marvelous exhibition Rooms of Wonder: From Wunderkammer to Museum, 1599-1899. Curated by our gracious hostess for the evening, Florence Fearrington (UNC A.B. 1958), the show is a wondrous assemblage of books that document the cabinets of curiosities formed mainly by Europeans, as well as their descendant phenomena, which include the first natural history museums in Europe and the U.S.A.

De rigueur for every cabinet of curiosities were a crocodile and a mummy, although cabinets might also include minerals and gems, shells, relics, tools, or other man-made objects. The UNC Rare Book Collection has a “Curiosities Cabinet,” which includes representative non-codex examples in the history of the book, such as these cuneiform tablets.

The show, which continues through February 2, has received much favorable notice in the book world and the press, including the Wall Street Journal and the New York Times.

Young UNC alumni now resident in N.Y.C. enjoyed the exhibition immensely and bore witness to Chapel Hill’s bibliophilic spirit in their new hometown. It was a grand night, and we are grateful to alumna and collector Florence Fearrington for making it all possible.