The textual history of Wordsworth’s Excursion, intended as a first installment of his planned magnum opus The Recluse, is astonishingly complicated. The texts that became The Excursion were composed over many years, with portions drafted as early as 1797. These poetic fragments would continue to grow as Wordsworth’s conception of the poem changed over the course of almost twenty years. Furthermore, portions of what would eventually become books 1 and 2, “The Wanderer” and “The Solitary,” had been sometimes referred to under the varying titles “The Ruined Cottage” and “The Pedlar.”

The Excursion first appeared to the public eye in 1814 in a handsome quarto edition, and went through several more editions during his lifetime. Wordsworth continued to revise the poem even after publication, as was his habit throughout his career. “The Wanderer” and “The Solitary” received substantial revisions in 1845, and the newly revised text would see publication, first in a posthumous collected edition by his authorized publisher, Moxon, in 1849 and then in a stand-alone edition in 1857.

This already complicated history of revision, before and after publication, is further confused by the appearance in 1859 of a volume titled The Deserted Cottage, produced under the imprint of George Routledge and Company. This curious book represented itself in the preface as the fulfillment of a wish by Samuel Taylor Coleridge to see “the first two books of The Excursion … published separately,” though Wordsworth himself seems never to have used the title The Deserted Cottage in reference to the first two books of The Excursion nor did he ever conceive of bringing them into publication separately from the whole.

Routledge reproduces the text of the 1814 Excursion, which had come out of copyright in 1858. However, that text was issued before the extensive revisions incorporated in Moxon’s 1857 edition of The Excursion. Whether readers noticed or minded the missing revisions in the text is unknown. Packaged in an array of attractive colors of decorative cloth, and additionally offered in leather with gauffered edges and marbled endpapers, The Deserted Cottage was marketed by Routledge like a gift or prize book. The copies in the RBC’s Wordsworth Collection speak to this history: several contain contemporary gift inscriptions.

When making a trip to the North Pole, you may have better luck hitching a sleigh ride with a mysterious old man cloaked in red, rather than traveling with arctic explorer Charles Francis Hall. His expedition to the North Pole in 1871 via the sailing ship Polaris ended in disaster due to harsh weather and an unruly crew. Hall’s arctic adventure and many others are chronicled by Alexander Hyde in The Frozen Zone and Its Explorers  (Hartford, Conn., 1874) / Travel Collection G620 .H9. Wherever you are headed this time of year, the Rare Book Collection wishes you safe travels and a good read.  Happy Holidays!

Today marks 120 years since the passing of the great Scottish writer Robert Louis Stevenson in 1894. The author of such classics as Treasure Island and The Strange Case of Dr. Jekyll and Mr. Hyde, Stevenson was only 44 years old when he died in the Samoan Islands of a mysterious sudden illness. Though he lived a short life, Stevenson’s writings revived the Romantic movement in his time and continue to inspire wonder in readers today.

The Rare Book Collection at the University of North Carolina at Chapel Hill is fortunate to have a large number of works by and about Robert Louis Stevenson. Many of these fine and rare volumes were generously gifted by renowned doctor and book collector Carl W. Gottschalk and his wife Susan K. Fellner. Dr. Fellner is a research professor in UNC’s Department of Cell and Molecular Physiology. The late Dr. Gottschalk was Kenan professor and distinguished research professor of medicine and physiology at UNC and an eminent expert on the kidney. His stellar library of rare books on the human kidney came to the RBC following his death in 1997.

Stevenson is best known for his prose, but he also published several works of poetry. One highlight from the Gottschalk gift is an elegant edition of children’s poetry (below). A Child’s Garden of Verses was originally published in 1885 by Longmans of London after a trial book had appeared the same year with the title Penny Whistles. It was subsequently re-editoned many times due to the popularity of its over 60 short poems.

The RBC’s 1896 edition of A Child’s Garden of Verses was published by John Lane of London in a lovely green binding with gilt decoration to the spine and covers. It features 100 illustrations by the prolific English illustrator Charles Robinson. A Child’s Garden of Verses was the first full work that he illustrated. This edition was so popular that it demanded several additional printings.

Of all the poems in A Child’s Garden of Verses, one seems to capture the essence of Stevenson’s writing better than all the others: The Land of Story-books.

At evening when the lamp is lit,
Around the fire my parents sit;
They sit at home and talk and sing,
And do not play at anything.

Now, with my little gun, I crawl
All in the dark along the wall,
And follow round the forest track
Away behind the sofa back.

There, in the night, where none can spy,
All in my hunter’s camp I lie,
And play at books that I have read
Till it is time to go to bed.

These are the hills, these are the woods,
These are my starry solitudes;
And there the river by whose brink
The roaring lions come to drink.

I see the others far away
As if in firelit camp they lay,
And I, like to an Indian scout,
Around their party prowled about.

So, when my nurse comes in for me,
Home I return across the sea,
And go to bed with backward looks
At my dear land of Story-books.

Whether young or old, one cannot help falling in love with Stevenson’s tales. Possibly what makes Stevenson’s writing so beloved is its timeless ability to tap into the imaginations of readers. Stevenson’s fiction comes alive in the minds of those who close their eyes with childlike wonder and allow themselves to be transported to the worlds where pirates bury treasure and monsters lurk in the night.

It’s headed for 10 degrees. And we’re ready! Floating icebergs, walruses sporting, seals on the ice, narwhals, and the haunt of the sea-birds. We’ve got our books–and our sweaters–to keep us warm.

It’s forecast to feel like Siberia here in the Southern part of heaven. So we’re dressing for it in our Northern sweaters. And turning to our Travel Book Collection for tales of frosty lands.

This volume has to have one of the most evocative of 19th-century decorated bindings—with its images of an angel, chaos, a shackled prisoner, and icicled letters. However, looking for the story inside, one is disappointed. The book is a salesman’s sample, a dummy book, or “blad,” and has only a hundred of the title’s 545 pages. Blads were used by traveling salesmen as samples of books that could be purchased by subscription. On the inside front cover, specimen spines of alternative binding styles were customarily mounted, as shown below. 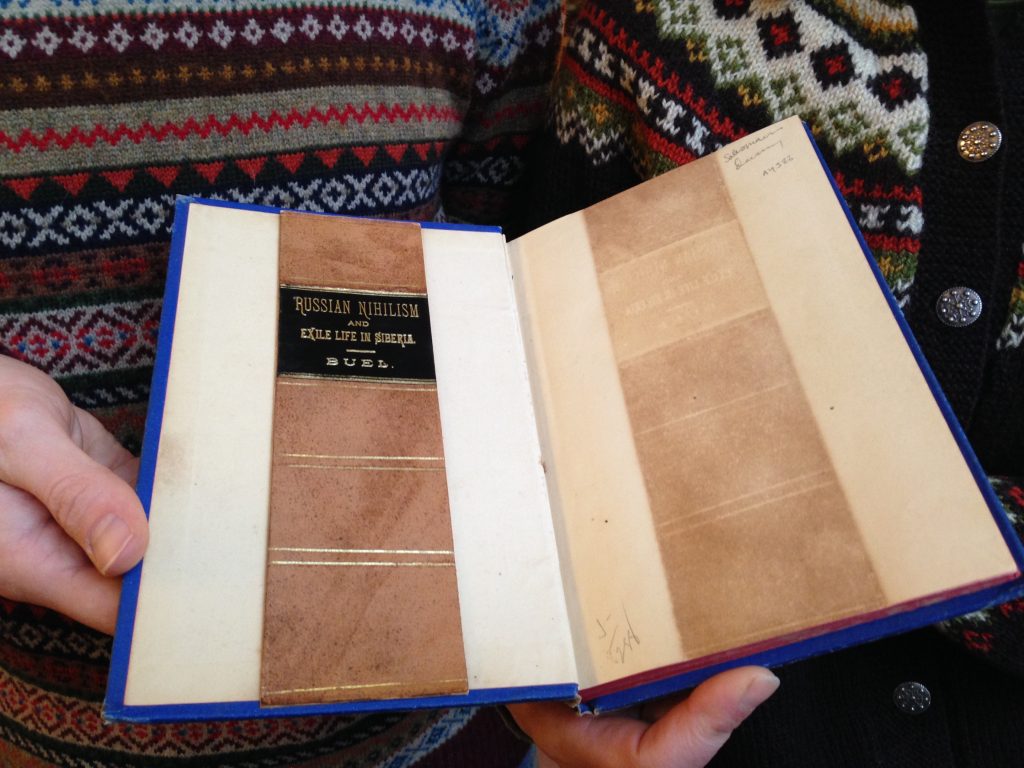 The back of this book features a notice on “Conditions of Subscription,” which lists the price in a cloth binding at $2.50 and a leather one at $3.00. It stipulates that the book is for sale by subscription only “and will never be for sale in book stores or on railroad trains, and persons desiring to purchase must do so from the canvassing agent.” 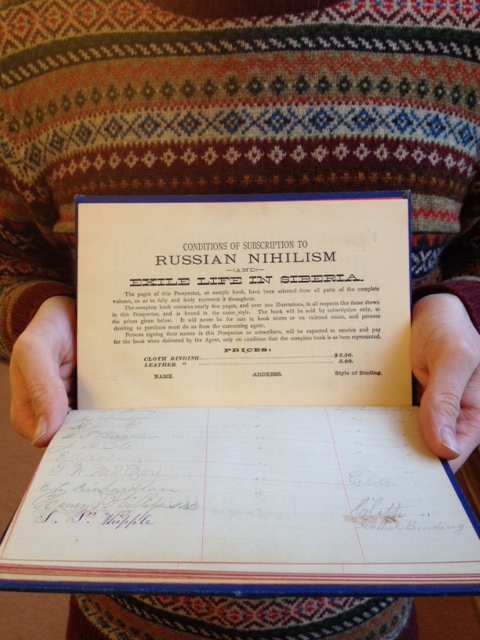 The terms further state that “Persons signing their names in this Prospectus as subscribers, will be expected to receive and pay for the book when delivered by the Agent, only on condition that the complete book is as here represented.” Of the twenty-two individuals subsequently signing, seventeen requested that the book be bound in leather, a decision that mystifies us, enamored as we are of the pictorial binding.

To view this book’s cloth covering—and the decoratively patterned coverings of the RBC’s stewards—come out of the Chapel Hill cold and get warm inside Wilson Library’s North Carolina Collection / Rare Book Collection Reading Room.