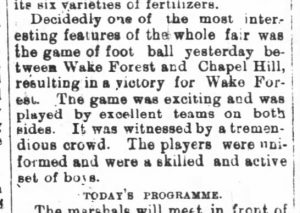 In the University Archives, our work often has us viewing contemporary events with an eye toward the past. So while we look ahead to Friday night’s football game between UNC and Wake Forest, we see it not just as an important matchup for the undefeated Tar Heels, but also a chance for Carolina to avenge its loss to Wake Forest on October 18, 1888, in the first football game played by UNC.

Or maybe not. We thought the facts were pretty clear when we looked at newspaper coverage of the game, which was played in Raleigh at the State Fair. The News and Observer mentioned the game in the following day’s paper as part of its coverage of the fair:

Decidedly one of the most interesting features of the whole fair was the game of foot ball yesterday between Wake Forest and Chapel Hill, resulting in a victory for Wake Forest. The game was exciting and was played by excellent teams on both sides. It was witnessed by a tremendous crowd. The players were uniformed and were a skilled and active set of boys. (News and Observer, 19 October 1888).

Official records have the final score as a 6-4 in favor of Wake Forest. But the coverage of the game by UNC students tells a different story.

At the time the game was played, there was no student newspaper (the Tar Heel was established five years later, in 1893). The primary student publication on campus was the University Magazine, a professionally-printed periodical that included essays, stories and poetry, and campus news.

The University Magazine reported on the football game in its next issue, in an unsigned column called “The College World.” At first it seems to match the newspaper story: “A game of foot-ball was played at Raleigh during Fair week between the Wake Forest team and the University Soph. Class team, under a set of improvised rules. The score was two goals to one in favor of Wake Forest.” Then the story gets confusing. The Magazine report quotes the coverage in The Wake Forest Student, which seems to describe three different games (maybe they were three periods in the same game?). The response from the Magazine is pretty direct:

No one objects to The Student’s exulting over the victory (?), if it can find anything in it to exult over, but it should be fairer towards its opponents. There were many more rules which were strange to the University than to the Wake Forest team. It was by these rules, unfair and peculiar, that Wake Forest got the credit of a victory . . .” (University Magazine, vol. 21, no. 2, 1888, p.85).

The Magazine goes on to compare the game to the one played between UNC and Trinity College (predecessor to Duke University) a month later, which it called the first “scientific” game of football played in North Carolina. It’s certainly understandable that the very first game of what was a new sport to all involved would result in some misunderstandings about the rules. As the debate continued in the student press, the Magazine remained adamant that UNC was the superior team and that the October 18, 1888 victory for Wake Forest did not count. By contrast, the student authors conceded that the UNC team was outplayed in a fair game against Trinity.

The next issue of the Magazine continued the debate, responding at greater length to more claims from the Wake Forest student paper. It’s worth reading in its entirety. In closing, the author continued to insist that the game against Wake Forest did not count, writing:

A fair-minded man likes to see merit win, whoever possesses it, and can admire it in an opponent. The University team has played but one game of foot-ball, and was then beaten fairly as this Magazine cheerfully acknowledged. It wished to show that, while in the game with Trinity merit won, in that on Thursday of Fair week it did not. (University Magazine, vol. 21, no. 3, 1889, p. 137).

While this was clearly a spirited debate at the time, history seems to have come down on the side of Wake Forest. Some long-lasting rivalries have disputed games in their past (see for example, Georgia-Florida), but there is no further record that we could find of the earliest UNC game being contested. In everything we have read online and in print, the October 18, 1888 loss to Wake Forest is widely credited as being UNC’s first football game. To be fair, the UNC and Wake Forest teams definitely played on that date, and the News and Observer report did not refer to it as a scrimmage or unofficial game. In an era well before the establishment of the NCAA or other governing bodies, the very idea of an “official” game would have been an unfamiliar concept.

But the student authors of the Magazine were persistent in their claims. What do you think: does Wake Forest really deserve credit for their 1888 victory over Carolina? Will “Avenge 1888!” be the rallying cry that leads Mack Brown and the Tar Heels to victory tomorrow night? Here’s hoping so. Go Heels.