We currently find ourselves in the middle of campaign season. For the next two (or possibly three) weeks, the Pit will be abuzz with excited, albeit cold, campaign workers, the pages of the Daily Tar Heel will be filled with news of the latest endorsements, and evenings will be dominated by candidate forums. Some wonder if all the “fuss” involved in Student Body President Elections is worth it. That question is a matter of opinion. However, it is possible to objectively examine how the Office of the Student Body President became important enough to warrant the attention afforded to those who campaign for it. 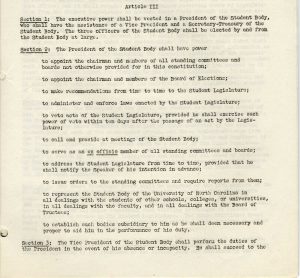 Perhaps it is the relative stability of the Office of the Student Body President that has most enabled it to flourish. Since 1946, little has changed in the Executive Branch. Conversely, the Legislative Branch has changed names, composition, and, to a certain extent, purpose numerous times.