This essay was composed for the Worth 1,000 Words project by scholar DREW A. SWANSON. Drew is a doctoral candidate in history at the University of Georgia and a fellow for the Wormsloe Institute of Environmental History. He is also former employee of the Grandfather Mountain tourist attraction. Swanson’s article “Marketing a Mountain: Changing Views of Environment and Landscape on Grandfather Mountain, North Carolina” was recently published in the APPALACHIAN JOURNAL. 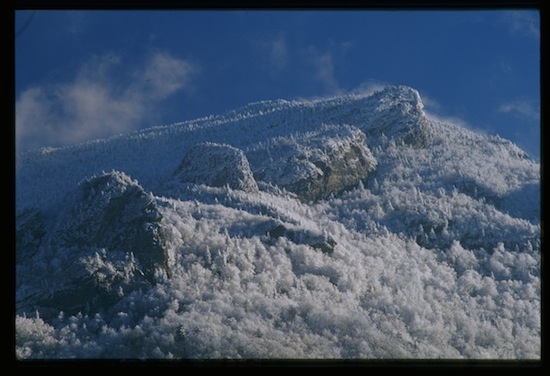 For more than fifty years, Hugh Morton and Grandfather Mountain were all but synonymous. Grandfather has existed as a peak in North Carolina’s Blue Ridge Mountains for millions of years, and Morton was more than simply the mountain’s owner; he was also a prominent businessman, politician, and environmental activist. Yet between 1952 and 2006 – Morton’s tenure as Grandfather’s owner – few North Carolinians could imagine either man or mountain without thinking of the other. Morton developed Grandfather into one of the state’s most popular tourist attractions, and, in the process, he ended up preserving an environmentally invaluable portion of Appalachia.
Tourism on the peak predated Morton’s ownership, however. Among Grandfather’s earliest tourists were scientists intrigued by the mountain’s biota, dramatic vistas, and geological formations. Explorers of the late eighteenth and early nineteenth centuries included the French botanist André Michaux, geologist Elisha Mitchell, and Harvard professor Asa Gray. John Fraser, Charles Sargent, and John Lyon also spent time exploring the slopes. These men plumbed the peak for the taxonomic glory of naming species new to western science, and they often wrote glowing accounts of the local environment. Michaux declared Grandfather “the highest mountain in all of America” in 1794, and Gray exaggerated almost as much in 1841, labeling the peak an “unbroken wilderness.” These men of science were the first of millions of tourists to visit Grandfather, intent on exploring its natural features.
Scientists continued to visit the mountain during the second half of the nineteenth century, but author and hotelier Shepherd Dugger initiated the commercialization of Grandfather Mountain tourism in the mid-1880s. Dugger opened a small hotel on the western flank of the mountain, near the headwaters of the Linville and Watauga rivers, and advertised his boarding house as a retreat for urbanites suffering from a variety of ailments, including “Hay-fever” and tuberculosis. 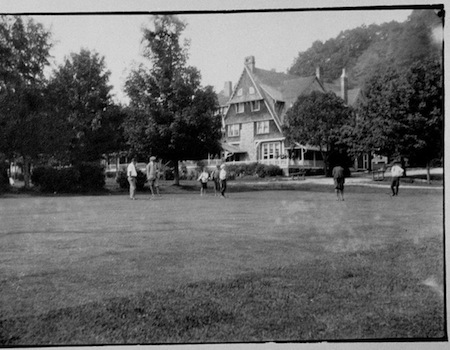 Tapping into a national interest in health resorts, Dugger pitched Grandfather’s clean air and the region’s coniferous forests as curative forces. Among the hotel’s attractions was Grandfather’s spectacular scenery. Hotel guests typically hiked the mountain, exploring the cliffs, wind-dwarfed forests, and views that had long attracted botanists and geologists. Dugger drew additional attention to Grandfather as a tourist destination through his secondary occupation – author. Beginning in the 1890s, Dugger published accounts of the region pitching western North Carolina as a vacationland. Dugger’s hotel and books drew guests from Philadelphia and Chicago, among other places, to Grandfather. 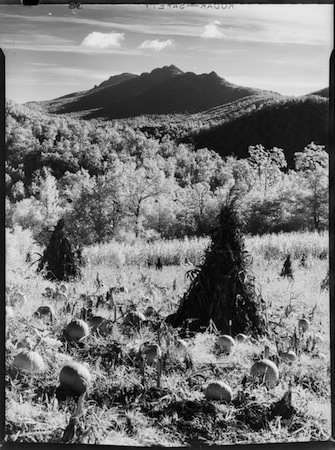 Other local residents had their own uses for the mountain environment, aside from the aesthetic and scientific interests of adventuring hikers. Families in the valleys surrounding the peak used Grandfather’s forests as rangeland for their livestock, gathered chestnuts and ginseng in rich coves, hunted game in the woods, and cut small quantities of timber from the mountain. Some agriculture also took place at the base of Grandfather, as yeoman farmers cleared small fields in the woods to raise corn and rye. These subsistence and market activities were common across much of southern Appalachia, but land use on Grandfather throughout the nineteenth century was relatively light compared to more populous and accessible reaches of the southern mountains.
After touring the region in 1888, Hugh MacRae, the son of a wealthy Wilmington shipping family, purchased a 16,000-acre tract that included a portion of Grandfather, and over the next decade MacRae worked to transform the forested land into a tourist destination. MacRae formed the Linville Improvement Company (LIC), and began construction of a resort at the southern foot of the mountain. The company named the new town Linville. The LIC marketed Linville as a playground for wealthy northeasterners, who flocked to the burgeoning resort in the 1890s. Like Dugger, the LIC sold the Grandfather environment as one of its resort’s key features. Tourists fished for trout in the Linville River’s clear waters, hiked or rode horses across the mountain slopes, and played golf on one of the state’s first courses. Advertisements touted Linville’s “endless original forests, unsurpassed for the beauty and variety of their trees,” and assured readers that “nowhere have the beauties of nature been better preserved.” The LIC also drew on nature in its resort design. The company constructed large vacation homes and a massive lodge in a rustic style, featuring exposed beams and shingle siding made of peeled chestnut bark. The resulting village resembled a community of overgrown mountain cabins favored with views of the rushing river and Grandfather’s rocky peaks.
Tourism and timbering often went hand-in-hand in turn of the century Appalachia, and the situation on Grandfather was no exception. Around 1900 the East Tennessee and Western North Carolina Railroad that sped tourists to Linville also connected the region to outside markets, and large-scale timbering interests opened shop on the edges of the mountain’s forests. The LIC operated its own sawmill that processed Fraser fir, red spruce, and hemlock from the mountain’s southern slopes. The Boone Fork Lumber Company built a substantial mill on the northern side of Grandfather in a new logging town – Shull’s Mill – and the company laid narrow-gauge rail lines into remote hollows. The Boone Fork Lumber Company alone employed three hundred loggers and clear-cut more than 1,000 acres annually by the late 1910s. These extractive efforts had drastic environmental consequences. Forest fires fed on the wood debris, or slash, left behind by logging – conflagrations ravaged the mountain in 1926 and 1940 – and the denuded slopes did little to slow runoff, leading to flooding problems in the valleys below the mountain. 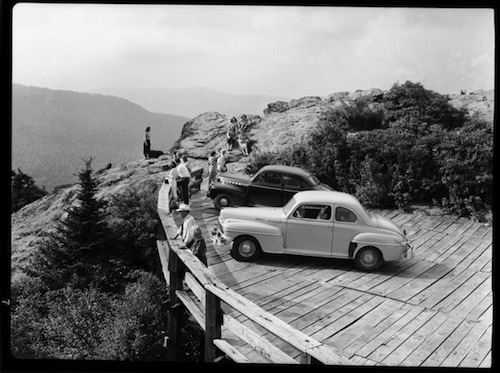 Linville resort town continued operation throughout the interwar years, even as the surrounding forests succumbed to industrial logging. Much of Linville’s popularity could be attributed to the growth of private automobile ownership, as Americans swarmed to scenic outdoor destinations in ever-increasing numbers. Capitalizing on this trend, the LIC constructed a gravel toll road to a cliff on the mountain’s southern slopes in the early 1930s, where visitors could take in the scenery from an observation deck complete with a gift shop. With this new road, tourists ascended the mountain with unprecedented ease, bringing increasing numbers of visitors into contact with the mountain environment in a carefully circumscribed fashion. Despite the toll road’s success, by the 1940s the LIC faced financial difficulties; the company broke up its holdings, privatizing the town of Linville and dividing company lands among its shareholders. Among the beneficiaries was Hugh MacRae’s grandson, Hugh Morton, who received the tract of land that included Grandfather Mountain in 1952.
When Morton took over Grandfather from the LIC, he set about implementing sweeping changes, intent on attracting more tourists to Grandfather. He lengthened the toll road to the ridgeline, and built a visitor’s center and the famous “Mile High Swinging Bridge” across a chasm dividing Linville Peak. He also initiated an advertising campaign that pitched travel to Grandfather as a particular sort of nature tourism, in which tourists could encounter pristine mountain woodlands while enjoying the conveniences of home in the form of restrooms, picnic shelters, and a restaurant. These efforts changed portions of the Grandfather environment even as the park stressed the ecological beauty of the mountain landscape, which was slowly recovering from the ravages of logging. Using bulldozers, dump trucks, and dynamite, workers carved into the mountain’s southern slope, building a paved roadway, parking lot, and the stone visitor’s center, forever altering the mountain profile. The park also sold the local environment as the setting for a number of growing events. “Singing on the Mountain,” an annual gospel gathering first organized in 1924, expanded mid-century, drawing such prominent personalities as Billy Graham and Johnny Cash. In 1956, the park hosted the first annual Grandfather Mountain Highland Games, a Scottish folk festival that sought to temporarily 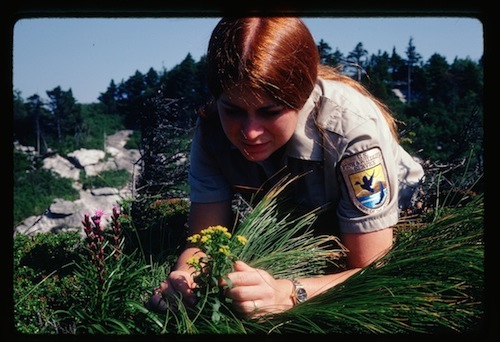 transform the park into a patch of the Scottish Highlands.
Although Grandfather remained a private park throughout Morton’s life, during the late twentieth century the property grew to increasingly resemble state and federal parks. Park workers built and maintained a series of hiking trails, staffed a native wildlife zoo, and cooperated with a variety of organizations in environmental conservation and research projects. These changes took place as Morton himself became more involved in environmental issues, including his long campaigns to reduce air pollution and to preserve scenic viewsheds. Reflecting this growing stewardship ethic, Morton signed easement agreements with the Nature Conservancy and entered into a relationship with a United Nations program, the Southern Appalachian Man and Biosphere Cooperative.
Both of these ties ensured that the bulk of the mountain’s ecosystems would be protected from further development in perpetuity. Under these agreements, Grandfather once again became a site of scientific exploration, as researchers worked to document the park’s resources, and these conservation efforts became part of the mountain’s attraction to visitors interested in ecotourism.
Morton passed away in 2006, and in 2009, North Carolina acquired the vast majority of Grandfather from Grandfather Mountain Inc. for $12 million, and the peak became the thirty-fourth unit in the state park system. For decades, Morton’s interest in and stewardship of Grandfather had kept the land out of state hands; but, at the same time, Morton helped ensure that the peak remained a relatively well-preserved piece of the Appalachian environment, visited and loved by millions of tourists. Today a nonprofit group – the Grandfather Mountain Stewardship Foundation – manages the park’s developed section, while the state supervises the remainder of the peak. Under this shared management, Grandfather should continue to attract tourists interested in the Appalachian environment for years to come.
–Drew A. Swanson

Covington, Jr., Howard E. Linville: A Mountain Home for 100 Years. Linville, NC: Linville Resorts Inc., 1992.
Dugger, Shepherd M. The Balsam Groves of the Grandfather Mountain, A Tale of the Western North Carolina Mountains, Together with Information Relating to the Section and Its Hotels, Also a Vocabulary of Indian Names and a List of Altitudes of Important Mountains, etc. Philadephia, PA: John C. Winston, 1907.
Dugger, Shepherd M. The War Trails of the Blue Ridge, Containing an Authentic Description of the Battle of Kings Mountain, the Incidents Leading up to and the Echoes of the Aftermath of this Epochal Engagement, and Other Stories Whose Scenes Are Laid in the Blue Ridge. Banner Elk, NC: Shepherd M. Dugger, 1932.
Swanson, Drew A. “Marketing a Mountain: Changing Views of Environment and Landscape on Grandfather Mountain, North Carolina.” Appalachian Journal 36, 1/2 (2008-2009): 30-53.
The Eseeola Inn, Linville, North Carolina. Bristol, TN: King Printing Co., 1908.
Whisnant, Anne Mitchell. Super-Scenic Motorway: A Blue Ridge Parkway History. Chapel Hill: University of North Carolina Press, 2006.

2 thoughts on “Grandfather Mountain: Commerce and Tourism in the Appalachian Environment”