This is the third essay composed for the Worth 1,000 Words project, written by local sports expert ART CHANSKY. Chansky is the Associate General Manager of Tar Heel Sports Properties, sports writer/editor for area newspapers, and author of several books on UNC sports history. His latest is entitled Light Blue Reign: How a City Slicker, a Quiet Kansan, and a Mountain Man Built College Basketball’s Longest-lasting Dynasty (2009).

In the spring of 1985, I wanted to start an annual publication about UNC-Chapel Hill basketball. But the idea wasn’t a typical preseason magazine or a post-season coffee-table tome. It had to be special, just like the Tar Heels who had won the 1982 NCAA Championship and were on their way to becoming the most successful college basketball program of the decade under Coach Dean Smith.
The idea was a 9″ x 12″ collector’s item that, at the same time, would preview the upcoming Tar Heel team and honor the tradition and legacy of what was now an obsession among UNC alumni and fans across North Carolina and the country. A book that devotees would eagerly anticipate before the start of every season and, over the years, be part of an anthology on Carolina Basketball.
I went to see Coach Smith, and he liked the idea because his philosophy on recruiting was that any coach could spin a yarn to a youngster about what they would do together if he went to that school. Dean Smith would say, “Look what we’ve already done . . . wouldn’t you like to help us help us accomplish more?” 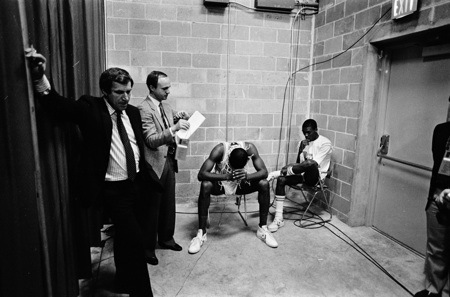 Smith agreed to give me “insider” recruiting nuggets on every new player he signed – as long as he could proofread the stories before they went to press. He thought the book could be good for recruiting because it might give parents of high school stars additional insight into his program.
“And, of course, you’re going to have Hugh Morton take pictures,” Smith added, as I was leaving his office.
My colleagues and I already referred to Morton as “the White House photographer” because he could go anywhere he needed to “take pictures” of Carolina basketball and other campus events. He had been doing that long before Smith arrived in Chapel Hill in 1958, all the way back to the UNC Spring Dance in 1942 at the old Tin Can, with a close-up of the Tommy Dorsey band and a handsome young singer named Frank Sinatra. Over the years, basketball in Chapel Hill became another passion for Morton.
In 1982, for example, he was in the locker room at the Super Dome in New Orleans with Michael Jordan and his father after Jordan’s jumper from the left wing secured Smith’s first national championship. He was in the holding room with Smith and Final Four Most Outstanding Player James Worthy as they collected their thoughts before facing the media throng. He was on the team plane with the Tar Heels as they headed home for a wild celebration.
All of those photographic images, plus dozens of other pictures, were in the championship book I wrote and published in 1982 called March To The Top. 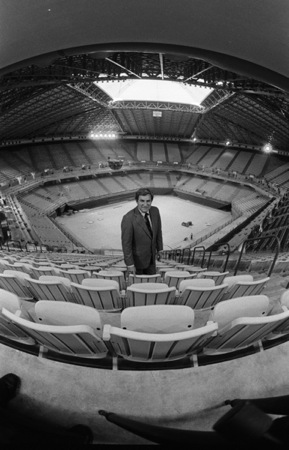 When the inaugural issue of Carolina Court came out in October of 1985, Morton had somehow convinced his favorite basketball coach to climb the stairs to the upper deck of the half-finished Student Activities Center to pose for the cover. A few months before, Morton had hopped into a University helicopter to take overhead shots of the amazing structure being erected on South Campus that was eventually named the Dean E. Smith Center.
Morton’s other photos in Carolina Court, Volume I, literally spanned the globe, beginning in Chapel Hill with the annual “Carolina Gentlemen” picture at a campus landmark with the players dressed in coats and ties. He had traveled with the team to Tokyo the previous December, snapping his shutter hundreds of times to capture Brad Daugherty riding in a rickshaw pulled by an old Japanese man and Linnea Smith (the coach’s wife) having fun with a young native girl on a tour of Tokyo. During the summer, Morton went to the homes of Smith and his three assistant coaches (Bill Guthridge, Eddie Fogler and Roy Williams) to take family portraits. He was allowed into a meeting in Smith’s office for a candid photo of the staff at work. It showed Williams – a “restricted earnings coach” on a bare-bones income – legs crossed with a hole in the sole of his left shoe. 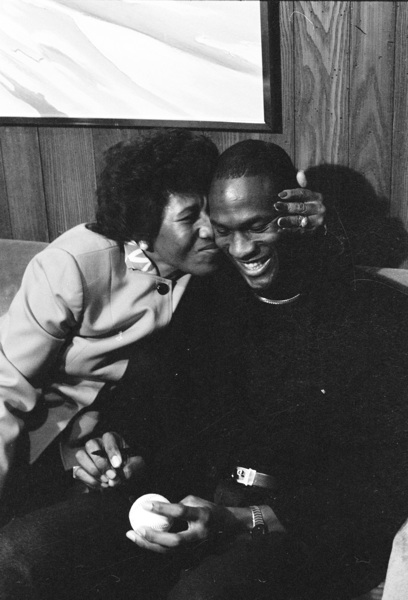 In subsequent years, Morton went wherever the Carolina Court staff went to tell the present-and-past story of the Tar Heels. Before the 1987 season, we were in Los Angeles, where Mitch Kupchak was winding down his playing career with the Los Angeles Lakers and James Worthy had become an NBA All-Star. Hugh caught Kupchak wrapped in ice bags after a tough practice and Worthy with his two prized boxers by his swimming pool. We also went to visit former Tar Heel All-American Charlie Scott, who was living in the breathtaking Hollywood Hills with his wife Trudy and Grover, their Orange Winged Amazon pet parrot.
As Smith had surmised, showing all this through Morton’s camera – what becomes of Carolina players after they leave Chapel Hill – would be good for recruiting. Our last stop on the West Coast was the suburb of Hacienda Heights, where a high school star named Scott Williams was playing his senior season after having signed with the Tar Heels. Morton clicked pictures of Williams and his wonderful parents, who would die tragically a year later.
The 1988 edition took us to Chicago to visit with the young Bulls star who was electrifying professional basketball. Largely because he had known Hugh Morton from the Azalea Festivals of his youth in Wilmington, Michael Jordan invited us back to his townhome after practice and back there again after their game that night against the Celtics. As unobtrusive as ever, Morton got the kid they were already calling “MJ” being snuggled by his mother Deloris and swallowing a baseball in his enormous right hand (which he revealed was the key to his dominating control of a basketball).
The next year, Morton and long-time Carolina historian Alfred Hamilton went on the road with the Tar Heels. On the team bus, the flight to Atlanta and as close to the action as Smith would approve. No one was allowed behind the team bench, poking his camera lens into the huddle, except the White House photographer.
In future years, it always began with the Carolina Gentlemen shot on campus and when economics forced us to convert from an oversized soft-covered book to standard magazine size, Hugh Morton was still there with feature photos and action shots. And when we were lucky enough to publish the sequel Return To The Top in 1993, Morton was back in the Big Easy, stationed baseline to chronicle his coach winning number two.
Like the chancellor of the era sitting in the second row behind the TV table and the Bowles family on the first row across from the home bench, it wasn’t a Carolina game without Morton crouched in the corner, at least two cameras strapped around his neck. He thought his sideline shot of airborne Vince Carter soaring in for a dunk almost rivaled his black-and-white award winner of Jordan jamming after stealing the ball from Virginia’s Rick Carlisle. 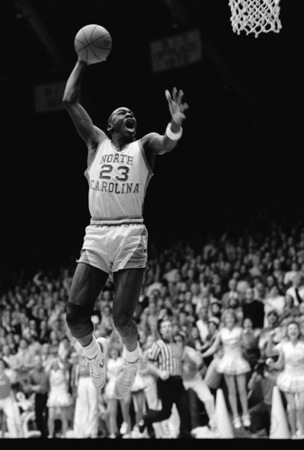 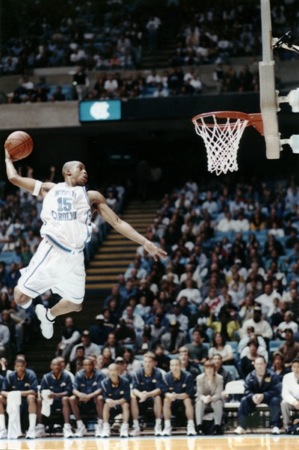 It did not matter whether it was Duke or Davidson, or after Doherty replaced Guthridge who succeeded Smith. Morton was still coming down the mountain, sometimes with Julia and using his regular room at the University Motel, or a back-and-forth trip with Harris Prevost or another good friend at the wheel. When Hugh Morton could no longer be there, something seemed amiss among the light blue masses at the ball game.
It still does. Thankfully, he was “taking pictures” all those years.
–Art Chansky