This essay was composed for the Worth 1,000 Words project by SUSAN TAYLOR BLOCK. Block is an independent writer and historian, a native of Wilmington, NC, and author of several books and articles on the history and culture of the Wilmington area, including a trilogy of photographic histories: Along the Cape Fear (1998), Cape Fear Lost (1999), and Cape Fear Beaches (2000). See the References section for links to more of Block’s work.

Being a native with an absorbing mind and a privileged background, it was easy for Hugh MacRae Morton to recognize Wilmington’s cultural and architectural gems. With steady aim, over six decades, he arrested scene after scene that celebrates life along the Lower Cape Fear. Some of his Port City photos tell a simple story, but others speak poetry about an old Southern city embedded with natural beauty, blessed with visionaries, and riddled with a few quirks. 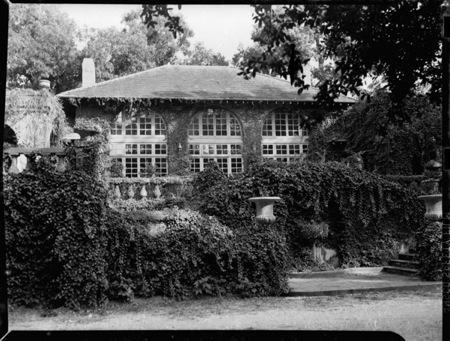 Hugh Morton took the last known series of landscape photographs and the only known interior shot of the “Bungalow,” a treasure-filled secret retreat of powerful men from 1907 until 1919. U. S. Presidents, railroad magnates, John D. Rockefeller, world famous opera stars, and numerous dignitaries from Italy are just a small number of notables who enjoyed the lavish hospitality inside, and the surrounding 2,200-acre hunting preserve outside.
The land and Italianate mansion were owned by industrialist Pembroke Jones, but envisioned and controlled somewhat by Henry Walters, the famously reticent art collector and railroad president. Architect J. Stewart Barney designed the Bungalow to contain secret passageways and a plethora of servants’ bells. A hidden underground tunnel was added later that led guests from the Wrightsville Sound waterfront to the basement of the lodge.
After the Joneses’ son, Pembroke III, inherited Pembroke Park in 1919, the parties dwindled, then ceased. Henry Walters had furnished the mansion with treasures he bought in Italy, the finer pieces of which became the core of the Walters Art Museum collection in Baltimore.


Thieves stole most of what Walters placed there after the house was abandoned. Arsonists completed the Bungalow’s destruction not long after Hugh Morton took these photographs. Hugh Morton’s grandfather, Hugh MacRae (1865-1951), would have been a regular guest at The Bungalow, and he frequented parties that took place at Mrs. Pembroke Jones’s neighboring 155-acre garden estate, Airlie.
Hugh Morton’s photo of Azalea Festival Queen Jacqueline White under the Airlie Oak serves as a reminder of the celebration’s age, and is a nature study in itself. The Azalea Festival originated as the dream of Dr. Houston Moore, but illness forced the physician to take a back seat. Morton, elected in absentia to be its first president, added muscle, energy, and connections to the fledgling organization.
Morton also led the campaign to name Jacqueline White “Queen Azalea I.” Selection of the velvet-skinned actress was meant to set an event precedent: choosing a leading lady with good looks, grace, and some genuine celebrity. White signed contracts with MGM and RKO before 1948 when this photo was taken, but her greatest work would come in 1952 when she starred in the film noir, The Narrow Margin.
The annual festival endures, but White’s dewy youth and post-war-era style is frozen. She continues to “reign” in this well-distributed photograph, sitting there permanently at the starting point of the festival timeline. The juxtaposition of the twenty-five year old human beauty and the gnarled 400-year old Airlie Oak accentuates the properties of both.
Though there was and is plenty of fluff to the Azalea Festival, two extraordinary things developed as a result of the annual event. One is the “Azalea Garden Tour,” conducted during the festival by Cape Fear Garden Club. All proceeds from the tour go to two scholarships and numerous local beautification and conservation projects. In 2009, during a recession, proceeds from the Azalea Garden Tour totaled $82,000. The other success is “Cottage Lane,” a jaunty grassroots Azalea Festival art show that jump-started a campaign to establish St. John’s Art Gallery, a clean-lined volunteer-powered organization that has evolved to be the sophisticated 40,000 square-foot Cameron Art Museum today. 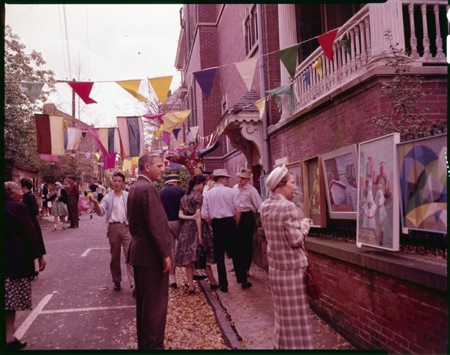 In 1953, Wilmingtonian Jimmy McKoy came up with the idea for the Cottage Lane Art Show. Azalea Festival officials were so wary of the plan that they offered only $13 to the small committee. McKoy, artist Claude Howell, and Gar Faulkner chose Cottage Lane as the venue for its charm and because Elizabeth Chant, one of Wilmington’s greatest artists and teachers, had lived in one of the lane’s cottages. Howell and Faulkner sought to lend a Parisian flavor by engaging a violinist and hanging “filling station flags.” Spikes on an old iron fence worked well to hang the paintings. At night, the three men moved the artwork to the basement of First Presbyterian Church, located just south of the Murphy House, seen here on the right.
The 1953 show was a huge success, followed by many other annual triumphs. Entertainment grew to include forty accordion players, a zany group of women artists who sang songs of their own composing, and a dog who howled to melodies. Camaraderie among the artists and a groundswell of community enthusiasm led to frenzied cries for an art gallery. Generously, St. John’s Tavern owner Henry B. McKoy offered the 1805 building as the site of what would soon be named St. John’s Art Gallery. The organization was founded in 1962. Today, its successor, Cameron Art Museum, operates in a building designed by Gwathmey, Siegle and Associates, and has gained national recognition as an art museum of distinction.
Hugh Morton designed the photograph below to be a promotion for the Azalea Festival and the USS North Carolina. Like the festival, relocation of the big ship was someone else’s idea, but Hugh Morton shouldered the load. Jimmy Craig, a Wilmington friend Morton met in Jaycees, envisioned the project, but died when a promotional plane flight ended in a crash in 1961. Craig’s death occurred just months after Morton photographed him at the muddy tract in which they hoped to berth the 728-foot-long ship. 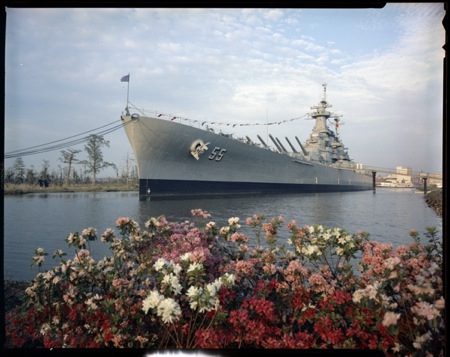 Subsequently, Hugh Morton became the prime mover and shaker of the battleship effort. He engaged everyone from John F. Kennedy to thousands of North Carolina schoolchildren in the effort to bring the ship home. Finally, ushered up the Cape Fear River by a fleet of tugboats, the USS North Carolina arrived at its new berth on October 2, 1961. On April 29, 1962, she was dedicated as a memorial to United States Veterans.
Though Morton could focus on something as small as a coral bell azalea bloom, he had a knack for seeing the big picture, and for figuring out what was wrong with that picture. At some point in the 1960s, he looked at the Cape Fear River and realized no one seemed to be appreciating it for the picture it created. 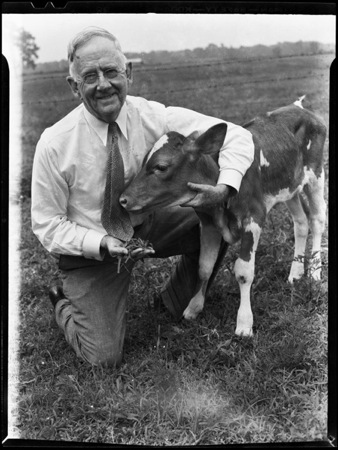 For centuries, the Cape Fear River had been regarded as merely utilitarian; liquid upon which watercraft moved. In fact, Morton’s great-great-great-great grandfather, Roderick MacRae used that path to reach Wilmington when he emigrated from Scotland in 1770. Morton was one of several businessmen who tried to present the river as a visual asset. After the Wilmington Hilton was built diagonally across the Cape Fear from the USS North Carolina, it became Morton’s favorite Wilmington place to stay following his move to Linville.
One of Morton’s most touching Wilmington photographs is of his grandfather Hugh MacRae, kneeling, dressed in a shirt and tie, and with his arm wrapped lovingly around a calf. Morton had a strong sense of modesty about family achievements, or he would probably have made more than just the handful of photos he took of his grandfather. This image exhibits MacRae’s dual career as Wilmington’s most creative and multi-talented businessman and as a trailblazing agrarian.
Morton took the photo at MacRae’s test farm, Invershiel, about 1949. It exhibits the softer side of a man who lived to outgrow much of the political incorrectness that was embroidered into Southern culture during his youth. Despite seeking anonymity, he was known to make generous gifts to those in need, whether black or white. Perhaps his bravest deed was to work publicly to rescue Jews from Nazi-occupied Germany. He worked with others to save the lives of at least ten families before all visas were disallowed.
Hugh MacRae counted Franklin Roosevelt and Woodrow Wilson as friends. He was conversant with Bernard Baruch and Henry Flagler. That Hugh MacRae Morton felt entirely comfortable elbow-to-elbow with men of power, talent, and achievement is no miracle.
–Susan Taylor Block