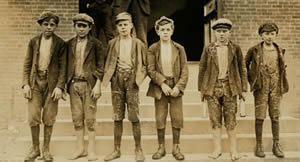 Sunday’s Charlotte Observer ran an editorial about the Lewis Hine photographs of North Carolina mills that have been digitized by the Library of Congress. Hine was the staff photographer for the National Child Labor Committee and traveled the country in the early twentieth century documenting children at work in mills, factories, and on farms. Some of his best-known and most striking photographs show unidentified children posed outside of North Carolina textile mills. In addition to the Library of Congress site, a sampling of Hine’s North Carolina work is available in the pamphlet “Child Labor in the Carolinas,” which has been digitized by Documenting the American South.