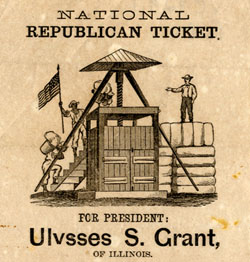 The North Carolina Collection has a fascinating collection of ballots from the 1868 state and federal elections. These provide a wonderful glimpse into the voting practices and campaign styles in use in the state 140 years ago. To begin with, candidates from the same party ran together on a single ticket, requiring voters to vote for parties rather than for individuals. The federal election ballot shown here has Ulysses S. Grant at the head of the ticket, with other candidates listed below (click on the image to see the full ballot).

In North Carolina, the big issue in 1868 was a new state constitution. This was the second attempt at a new constitution in three years. The 1866 constitution had been rejected by voters, and the entire document was rewritten with significant changes, including the removal of property requirements for officeholders, and the establishment of a public school system. In one of the most notable changes, African Americans were not explicitly prohibited from voting. The Republican Party supported the new constitution, while the Conservative Party strongly opposed it. In case voters had a hard time remembering which was which, the ballots themselves made it abundantly clear: 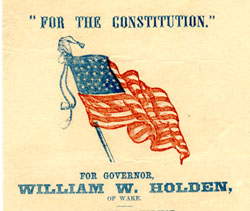 One of the important things to remember about this period is that this was before the practice of a private ballot was adopted. Elections often took place in the open, which may explain why ballots were printed in contrasting colors. If, for example, you were of a mind to persuade a voter through bribery or intimidation, the colored ballots would make it much easier for you to watch and see if they did as told on election day.