Many keyboards are clattering with chatter this week about the upcoming contest between the UNC and Notre Dame football squads on Saturday, so here’s our contribution.

You may be surprised to know that the host for the first encounter between these schools’  teams was neither Kenan Memorial Stadium in Chapel Hill nor Notre Dame Stadium in South Bend.  No, it was Yankee Stadium in New York City.

Why the Big Apple?

Starting in 1913, the annual Notre Dame versus Army football game evolved into a major rivalry.  From 1925 through 1946, the two teams battled at Yankee Stadium (with the exception of 1930, which was played in Chicago) in order to draw upon both institutions’ large alumni bases in New York.  The 1946 contest ended in a 0-0 tie between the country’s top two rated teams, and is a college football classic. The two previous years, however, saw Army routing Notre Dame with combined scores of 107—0, and the Black Knights declared that the annual meeting would cease with a finale to be played at Notre Dame Stadium in 1947.  The Fighting Irish’s returned to Yankee Stadium on November 12, 1949 to play UNC in their final appearance there until the 1963 Gotham Bowl.

The Tar Heels’ 1949 encounter with Notre Dame was not the first time UNC played in “The House that Ruth Built.”  Yankee Stadium was home field for the New York University football team beginning in the mid 1920s. UNC made its Yankee Stadium debut against NYU in 1936 with a 14-13 victory. The following year the UNC-NYU game was moved from Yankee Stadium to Ohio Field to make room for the World Series. Back in Yankee Stadium again in 1938, UNC bested NYU 7-0. 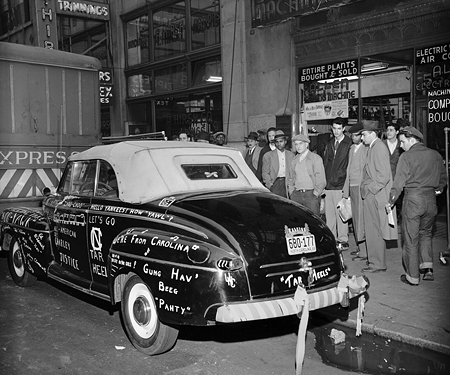 The Daily Tar Heel reported an estimated 25,000 UNC fans—with 2,200 student tickets sold—would head for New York to see the 5-2 Tar Heels take on the 6-0 Fighting Irish.  Those departing from Chapel Hill and vicinity traveled on two Seaboard Air Line Railroad and Southern Railway “specials,” Carolina Coach Company buses, and caravans of decorated cars.  The DTH published a small article describing some of their escapades along the way.  Yackety Yack photographer Bob Brooks photographed one of the automobiles parked on a New York street. The car is adorned with player names—featuring a train on the driver-side door featuring The “Choo-Choo” All-American Charlie Justice—and expressions, such as “Hello Yankees! How ‘Yawl’?” and “We’re From Carolina Gung Hav’ Beeg ‘Pahty.'”  The writing on the front fender cannot be made out entirely, but something or someone is “Gung Take Noo-Yawk.” 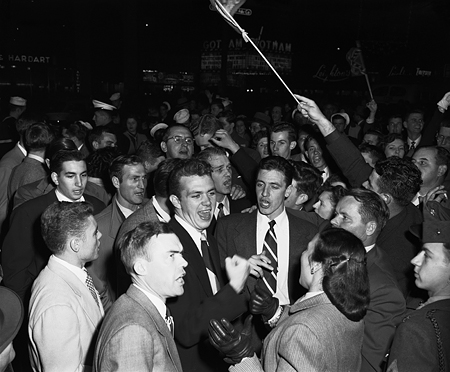 Brooks also captured at least two scenes during the huge pep rally of 3,000 UNC students on the preceding Friday night with 20,000 spectators lining the streets on Times Square.  The streets were full of Confederate flags and UNC fight songs. 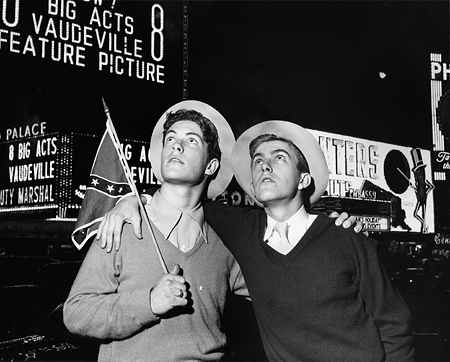 UNC registered the first score of the game, a touchdown by UNC running back Dick Bunting—seen on the bottom of the pile in the photograph below. Other UNC players, grouped in the center, are Kenny Powell on the far left, Joe Neikirk (#63), Art Weiner (#50), and Julian King (#84). 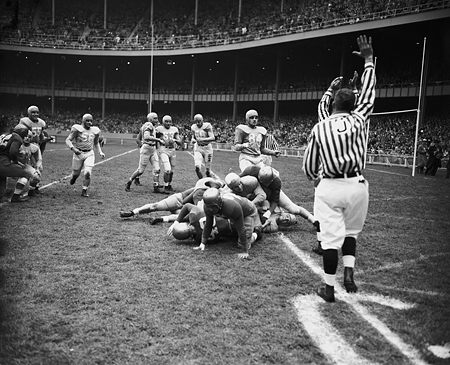 That would be the only UNC score. The Tar Heels held the eventual national champions to a 6-6 draw by halftime. But without the Tar Heels’ All-American running back Charlie “Choo Choo” Justice, who was unable to play after injuring his ankle the week before against William and Mary, and nowhere near the depth of reserves of their opponent, the Irish rattled off 36 unanswered points in the second half for the victory.  Through it all, Tar Heel fans remained highly spirited, described by DTH reporter Roy Parker, Jr. as “the cheeringest bunch of Carolina rooters ever assembled.”  Even after the game’s close, the singing of “Hark the Sound” drowned out the Notre Dame fight song.