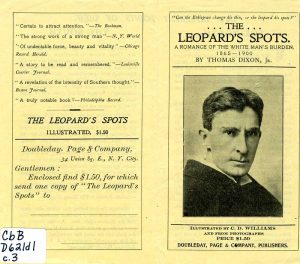 Described by the Dictionary of North Carolina Biography as a “minister, writer, lecturer, lawyer, playwright, producer, director, actor, legislator, and clerk of the federal court for the eastern district of North Carolina,” Thomas Dixon, Jr. was a man of many professions. Born near Shelby, North Carolina, on this day in 1864, Dixon is best known as the author of The Clansman, which started as a book, was made into a play, and then a movie called The Birth of a Nation. He also wrote The Leopard’s Spots: A Romance of the White Man’s Burden, 1865-1900, which historian Joel Williamson describes as a “twin plea for the exclusion of the [African American] from American society and for a reunion of North and South.” The image above is a publisher’s circular from ca. 1902 that can be found among the North Carolina Collection’s broadsides. To view other items about Dixon at the UNC Library click here. To view items written by Dixon click here.