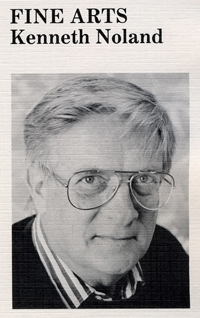 American painter Kenneth Noland was born on April 10, 1924, and this April marks his 85th birthday. Noland served in the Air Force during World War II and returned to Asheville after the war. He then took advantage of the GI Bill to attend art school at the experimental Black Mountain College near Asheville, and began his studies there in 1946.

There were several important artists on the faculty while Noland was at Black Mountain College, including Josef Albers and Ilya Bolotowsky. These acclaimed teachers were prominent artists in their own right: Albers came out of the Bauhaus School and Bolotowsky was a Cubist. Because Albers was on sabbatical most of the time Noland was at BMC, Noland worked primarily under Bolotowsky, but he did take Albers’ design class once he returned to teach. Both Albers and Bolotowsky had profound impacts on Noland’s work, as did the artists they introduced in their classes.

In an anthology of essays about BMC students and their time spent at the school titled Black Mountain College: Sprouted Seeds, Mervin Lane recounts an interview he had with Kenneth Noland in 1988:

Ken remembers with affection the entrance to the College, which has been designed by Albers. There was no gate, but there was a fairly long run of three or four white horizontal boards on both sides— and for a good stretch, leading toward the entrance. Ken remarked that those bright white boards gently angled through such interesting and gradual changes toward the opening that the visual effect was uninterrupted, so that someone entering was sort of ‘streamed’ through and on up the slight incline of the dirt road into the College.

In addition to this memory of the campus’ built environment, Noland also discusses the intangible nuances of BMC as a place. Noland mentions the alertness he felt while he was a student at BMC, and how the collaborative nature between professors and students contributed to his overall experience. In addition to the small size of the college, Kenneth Noland also attributes the success of the program to the school’s location in scenic Asheville, NC. Noland said, “And I also think that it was probably atmospheric. It might have had something to do with the sheer freshness of the environment, of the air there. Don’t you think that’s right?”

Although Noland is North Carolina born and bred, as an artist he is primarily associated with art movements and communities in Washington D.C. and later, New York City. Noland studied many European artists who focused on geometric abstraction and color theory, including Mondrian and Kandinsky, and was also influenced by American artists at the time, including Jackson Pollock and his action paintings. Shapes and color relationships are two major proponents of Noland’s work, which typically features repeating patterns, including concentric circles, chevrons, and parallel lines. Noland is perhaps best known for his “circle” paintings, which express a stylistic connection to the “squares” that are the basis of many of Albers’ works. In fact, Noland’s circle paintings have become iconic for both the artist as well as the period itself.

Noland emphasizes the materiality of the canvas and the process of applying paint by frequently using shaped canvases and a staining method of painting in order to achieve his often fluid relationships between line, color, and form. In addition to the concentric circles Noland paints, examples of this can best be seen where Noland expresses a repeating chevron pattern on a diamond-shaped canvas, or plaid patterns across a square canvas.

Although Noland lived outside of North Carolina after his student days at BMC, the Tar Heel State clearly left a lasting impact on his life and work. In 1995, Noland received a North Carolina Award in Fine Arts for “his innovative and influential work in modern abstract painting, and for enhancing North Carolina’s artistic reputation.” Noland and his wife currently live in Maine, and an article from the Asheville Citizen Times, 2007, reports that the couple purchased plots for a mausoleum in the Riverside Cemetery in Asheville, NC. Other notable residents of the Riverside Cemetery include Thomas Wolfe and Governor Zebulon Vance.

Because Kenneth Noland’s works are copyrighted, we cannot display them on this website. The link below will take you to The Official Website of Kenneth Noland, where you can view selected works by their creation date.