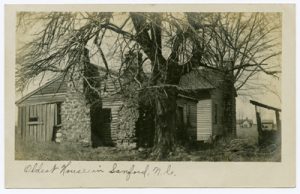 This real photo postcard of the oldest house in Sanford, N.C. is one of several cards produced by the Felch sisters that we’ve recently uploaded to the North Carolina Postcards website.  Stephen E. Massengill’s book “Photographers in North Carolina:  “The First Century 1842-1941” provided some brief biographical background on the two sisters.

Dora Alice Felch (b. ca. 1886) and her younger sister Edith E. Felch (b. ca. 1874) were both born in New Hampshire and worked as partners in their studio located above a post office in downtown Sanford between the years 1903-1908.  In 1908, both sisters married and relocated – Dora Alice moved back to New Hampshire, and Edith E. moved west to Idaho.

You can see several of the the Felchs’ other real photo postcards on our website here.